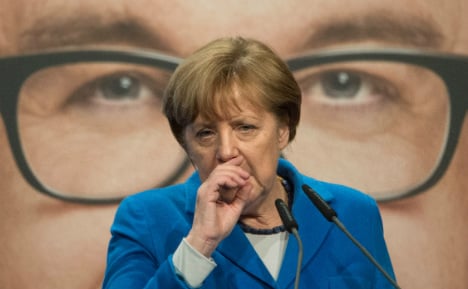 More than 12 million voters are due to elect three new regional parliaments for the southwestern states of Baden-Wuerttemberg and Rhineland-Palatinate, as well as eastern Saxony-Anhalt in the so-called Super Sunday polls.

The elections are the biggest since a record influx of refugees to Germany, and disgruntled voters are expected to seize on the opportunity to hit the ruling coalition where it hurts.

“These elections are very important… as they will serve as a litmus test for the government's disputed policy” on refugees, Düsseldorf University political scientist Jens Walther told AFP.

Surveys in the run-up to the polls have shown Alternative for Germany (AfD) steadily gaining momentum, with the latest published Monday by Bild daily showing backing reaching double-digit levels in all three states.

Merkel's Christian Democratic Union (CDU) was meanwhile bracing for a poor showing, particularly in its traditional stronghold of Baden-Württemberg, with the Bild poll showing support sliding by 10.5 percentage points to 28.5 percent — putting it for the first time behind the Greens, while the AfD snatched 12.5 percent.

“These are numbers that really hit us,” said Guido Wolf, the CDU's leading candidate in the southwest, adding that Sunday's was the “most difficult election campaign” the party has had to run.

In Rhineland-Palatinate where the fortunes of the CDU had been rising, leading candidate Julia Klöckner — who some believe could be Merkel's successor — is expected only to help the party to a tie with the Social Democratic Party (SPD), at 35 percent.

In Saxony-Anhalt, where the CDU still has a large lead in the Bild poll with 29 percent, AfD has a stunning 19 percent that almost draws it equal with the second placed Left Party, on 20 percent.

Merkel has been under intense pressure to change course and shut Germany's doors after 1.1 million refugees — many of them Syrians — arrived in Europe's biggest economy last year alone.

But she has resolutely refused to impose a cap on arrivals, insisting instead on common European action that includes distributing refugees among the EU's 28 member states.

Barely a week before the polls, Merkel told activists to take heart despite falling support for the party, saying: “It will pay off in the end.”

But public opinion towards her stance was divided, and AfD has capitalised on the darkening mood.

AfD began life in 2013 as an anti-euro party, but has since morphed into one that sparked a storm in January after suggesting police may have to shoot at migrants at the borders.

In what could be a preview of Sunday's polls, local election results published Monday in Hesse show support for AfD reaching 13.2 percent, propelling it to become the third biggest party in the western state.

Although the upstart party has seats in five regional parliaments and is represented in the European Parliament, it has so far made its biggest gains in former communist eastern states that still lag western Germany in jobs and prosperity.

But its inroads into western states have sparked alarm in a Germany mindful of its Nazi past.

With an eye on the upcoming polls, Vice-Chancellor Sigmar Gabriel warned voters that “we have a lot to lose if we deal carelessly with social stability and democracy”.

Merkel herself described AfD as a “party that does not bring society together and offers no appropriate solutions to problems, but only stokes prejudices and divisions”, while Finance Minister Wolfgang Schäuble branded them a “shame for Germany”.

Some 142 civic groups, including police unions, Jewish and Muslim organisations and aid groups, also published a joint appeal urging voters to turn up at the polls as a show of strength “against all forms of hate, racism, prejudices or violence”.