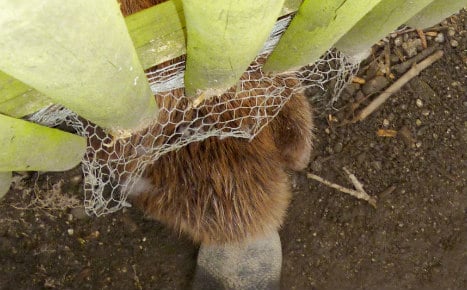 The two-year-old beaver had managed to squeeze the entire front half of his little body under the fence, but misjudged just how large his bottom was, a spokesperson for the Nature Protection Society said.

But once he was halfway through, he had no way of reversing back out and lay trapped under the metal mesh until passersby found him in the morning.

The concerned strollers alerted the Nature Protection Society, who in turn got the fire department involved.

Wanting to take no risks with the little creature’s precious derrière, the firemen cut the fence open using wire cutters, eventually freeing the rodent  who scurried unscathed into a nearby pond. The owner of the land on which the beaver marooned itself had been trying to prevent the hungry little fella from coming in and ravishing his plant life – but meshing of this type is not suitable for keeping the slippery semi-aquatic rodents out, Martin Hänsel of the Nature Protection Society said.

The now freed beaver is currently stretching his webbed: He is a member of a family that lives in a nearby city park, but as his parents have just had new offspring, he is on the look-out for a place to make a dam of his own.

Beavers are a protected species in Germany. Despite long being threatened with extinction, they are making a comeback, appearing in ever growing numbers on the outskirts of larger cities.

They are shy creatures who are tricky to spot in daylight, but if you come too close to them, they may well let you know it.

On the outskirts of Munich last year, two beaver attacks happened in quick succession on the River Würm when a beaver felt her young were under threat.