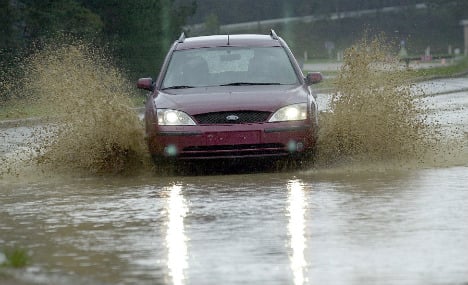 In the Middle East, the Israeli foreign intelligence service, Mossad, are renowned for their ability to swoop in from nowhere and take out their enemies in the most hostile of locations – whether it was hunting down the culprits after the 1972 Munich Olympics massacre, or assassinating Hezbollah leaders.

But in the small town of Quarnbek in northern Germany, two Israeli spooks attracted a little more attention than the shadowy agency is used to, and their actions have left the town mayor furious.

“If they’d gone back to their embassy and said 'hey we messed up, we need to pay for this' and then sorted things out from their side, none of this publicity would have been necessary,” mayor Klaus Langer told The Local.

“But unfortunately they didn’t and now it’s come to this.”

Stuck in the mud

The undercover duo were reportedly watching from afar on orders from the Israeli government in mid-December as a new submarine built in the German harbour of Kiel was making its maiden voyage down the canal connecting the Baltic to the North Sea.

They were following the underwater course from the bank and drove their Ford Focus through a gate marked with an “entrance forbidden” sign, according to broadcaster NDR.

An elderly lady noticed this suspicious behaviour and went over to question the men about their intentions.

“We’re planning out the route for an upcoming sailing regatta,” one of the men told her.

Finding it strange that anyone would want to plan a regatta on such a narrow body of water, she immediately alerted the police.

When the police arrived they found the men had got themselves into even more trouble – they’d managed to get their car stuck in mud and couldn’t manoeuvre it out.

With German law enforcement on the scene, the young men conceded that they were in fact there at the behest of the Israeli government and produced official papers to show that they were allowed to carry weapons.

Quarnbek coppers then stepped in to help out the inept agents, calling in the local fire service and then a farmer with a tractor to pull them out of the deep hole they dug themselves into.

Mayor Langer wants compensation for helping the agents out in a tight sport and has sent the Israeli Embassy in Berlin a bill for €1,263.01, for services including the use of a local tractor.

The costs involved paying the firemen, who work on a voluntary basis and must be compensated by the individual when the incident doesn’t involve fire, use of the fire services tools and the tractor.

The mayor still hasn’t heard from the embassy, although the letter was only sent last Thursday.

As for the some 1,800 townsfolk of Quarnbek, the incident has caused quite the discussion.

“For some they say they’re not bothered about the whole thing. Others say it is a disgrace [that the Israelis haven’t paid], while others ask how the German state can allow armed officials from another country to breach the monopoly on force of the state,” Langer says.