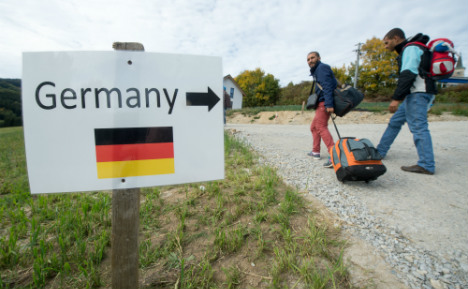 Germany recorded 61,428 asylum seekers in February, down by a third from January, data released Tuesday by the Interior Ministry showed.

Syrians made up the biggest group of people seeking refuge, with 24,612 arriving in February, while Iraqi and Afghan asylum seekers numbered around 12,000 from each place.

Not all of the newcomers have filed official asylum requests and only some will be allowed to stay as Germany has vowed to send back all “economic migrants” from countries at peace.

The figure may also include repeated registrations in different German regional states and people who have since moved on to other European Union countries.

Nevertheless, the sharp drop in new arrival numbers from January is expected to come as welcome news to Chancellor Angela Merkel, who has found herself under fire at home over her liberal refugee policy after around 1.1 million asylum seekers arrived in 2015 alone.

Although she has refused to slam the door shut, Merkel has campaigned for an EU-wide solution to the crisis that includes strengthening Europe's external borders and making a deal with Turkey to stop the irregular migrant flows.

Professor Wolfgang Kaschuba, director of the Berlin Institute for Research on Integration and Migration (BIM), told The Local that the reduction in arrivals reflects the fact that far fewer people are coming to Europe.

“Many families in the refugee camps don’t want to come to Europe and those that do don’t have the money any more – they have already invested it in a son,” Kaschuba said.

The idea that millions of refugees around the globe all want to come to Europe is “nonsense” he said, arguing that most Syrians want to stay near their country because that is where their properties and wealth lie.

Two other critical factors in the drop in numbers are the poor winter weather and the closing of borders along the Balkan route.

The closing of borders has become “central” in recent weeks, says Kaschuba.

“This will have been very quickly communicated back down the refugee routes via smart phone,” the BIM director says.

Whether the reduction in arrivals is a long-term trend will depend on whether European leaders “drop the populist pub politics and start following European and world politics” Kaschuba says.

For the Berlin-based academic, that means making sure warring factions in Syria stick to the terms of a recently instituted ceasefire arranged, and providing food and education services to the camps in neighbouring countries.