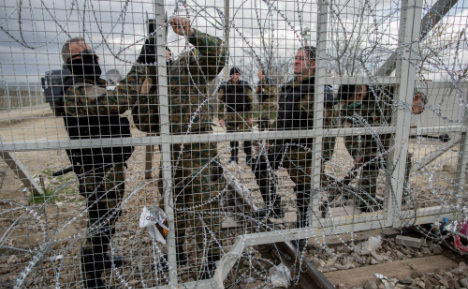 Macedonia guards at the border with Greece. Photo: DPA

Along with European Commission chief Jean-Claude Juncker, Merkel insisted on Monday that a mention of the route closure be dropped from the proposed closing statement of the summit in Brussels, European sources told AFP.

Divided EU leaders argued over the migrant route as they held a summit with Turkey's prime minister to urge Ankara to accept large-scale deportations of economic migrants.

The row underlined the deep divisions in the 28-nation European Union as it tries to harden its stance in the face of the worst refugee crisis to hit the continent since World War II.

More than one million refugees and migrants have arrived in Europe since the start of 2015 — mostly arriving in Greece from Turkey — with nearly 4,000 dying while crossing the Mediterranean.

“On the issue of how we can decrease the number of refugees not just for some countries but for all countries including Greece, the issue cannot be that something is closed, but that we find a sustainable solution with Turkey,” Merkel said as she arrived in Brussels.

The EU is putting the onus on Greece and Turkey, which is the launchpad for most migrants who cross the sea to the Greek islands and then travel up through the Balkan countries to reach wealthy Germany and Scandinavia.

Austria last month abruptly capped the number of asylum seekers it would accept, triggering a domino effect of border restrictions along the Balkans that has trapped tens of thousands of desperate migrants on the border between Greece and non-EU Macedonia.

'This route is now closed'

Merkel — who is facing pressure at home over her open-door policy towards refugees — and Juncker had objected to the initial draft statement approved by EU ambassadors on Sunday, which said: “Irregular flows of migrants along the western Balkans route are coming to an end. This route is now closed.”

The draft raised concerns that agile smugglers would circumvent EU barriers and take alternative routes, which those working on the migrant problem say could run through Bulgaria or Albania.

Brussels sees curbing the flow of migrants as part of a plan to restore by the end of the year the full functioning of Europe's cherished passport-free Schengen zone after the series of border closures.

It was timed with calls for better cooperation from Turkey — currently home to 2.7 million Syrian refugees — which signed a deal with the EU in November last year to curb the migrant flow.

Davutoglu said Sunday he would discuss with his EU counterparts efforts to begin building schools and hospitals for refugees within weeks with the three billion euros pledged by the bloc under the November deal.

EU president Donald Tusk said in his invitation letter for the summit that success depended largely on securing Turkey's agreement for the “large-scale” deportation from Greece of economic migrants who do not qualify as refugees.

Syrians, who top the influx of 1.13 million people into Europe over the past 14 months, are considered genuine refugees requiring admission under international law.

Despite progress in implementing the November deal with Turkey, the EU said, too many people were still heading from Turkey to Greece, with nearly 2,000 arriving daily in February.

Summit co-host the Netherlands said the bloc would not only push Turkey to stop the flow to Europe of all non-Syrian migrants but also eventually war-hit Syrians themselves.

“It's very important for Turkey to first take back all non-Syrian refugees but that's not enough,” said Dutch Prime Minister Mark Rutte, whose country holds the rotating EU presidency. “In the end, we want zero also for the flow of Syrian refugees.”

But Greek Prime Minister Alexis Tsipras — who has said he will not allow his country to become a “warehouse of souls” — renewed calls Monday for fellow EU members to honour a deal to relocate thousands of refugees.

“These  agreements that we do not implement are not agreements at all. So now there is a difficult situation that we have to handle,” he said.

The bloc adopted a scheme last September to relocate 160,000 asylum seekers from Greece and Italy, but only 872 people have actually been moved, according to the latest EU figures.