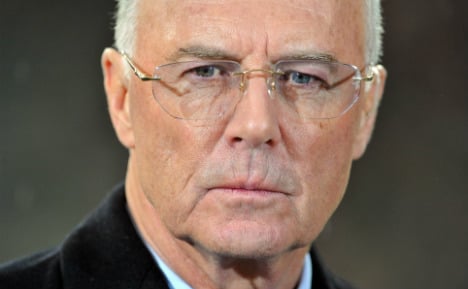 Beckenbauer, who captained and coached Germany to the 1974 and 1990 World Cup titles respectively, was head of the organising committee for the 2006 finals, but insists his former lawyer Robert Schwan, who died in 2002, ran his finances.

“I had nothing to do with it,” Beckenbauer told German daily Bild on Sunday when asked about a suspect money trail allegedly linked to Germany winning the right to host the 2006 finals, which the country fondly remembers as its “summer fairytale”.

“Robert handled everything for me — from changing the light bulbs to important contracts,” said Beckenbauer, 70.

On Friday, an independent inquiry commissioned by the German Football Association (DFB) said it could not rule out that Germany bought votes to secure the 2006 World Cup.

Beckenbauer has repeatedly denied both that any votes were bought and that he is guilty of any wrongdoing.

German football has been roiled by allegations, first levelled by magazine Spiegel last October, that the DFB used a slush fund to buy votes to secure the tournament.

At the centre of the inquiry by law firm Freshfields is a mysterious payment of €6.7 million.

Media reports have claimed the money was to buy the votes of four Asian members of FIFA's 24-strong executive committee. Germany in 2000 won the bid to stage the 2006 World Cup, beating South Africa by 12 votes to 11, with one abstention.

The German inquiry outlined a money trail linking the Beckenbauer-Schwan account, former Adidas chief Robert Louis-Dreyfus and Qatar, whose Mohammed bin Hammam has since been banned from football for life over corruption.

“I don't know what was done with the money in Qatar,” said Beckenbauer, who added that he knew nothing of the transaction. “We did not buy any votes. Definitely not.”

Beckenbauer again insisted the money was used to secure a subsidy from FIFA to help pay for the 2006 World Cup.

“Otherwise we would have not had a World Cup in Germany,” he said.

“Imagine if we hadn't got the World Cup — what a disgrace that would have been for Germany.”

Beckenbauer denied reports the DFB has tried to reclaim the 6.7 million euros from him, telling the newspaper: “I don't know anything about that.”

In football-mad Germany, Beckenbauer is regarded as an idol, but the scandal has damaged his image, something which clearly irks him.

“I am not going to allow my life's work to be ruined,” he insisted.

“I was a world champion as a player and coach. I helped bring the World Cup to Germany, which was a great success. It remains 'the summer fairytale'.”

“In hindsight, I might have made mistakes. Hindsight is easier than foresight.”

Beckenbauer's name appears 564 times in the 361-page Freshfields report, but the German says he has not read it.

FIFA has welcomed the report but said “many questions still remain to be answered”.

Beckenbauer was warned and fined by FIFA last month for his failure to cooperate with a separate investigation into the award of the 2018 and 2022 World Cups.