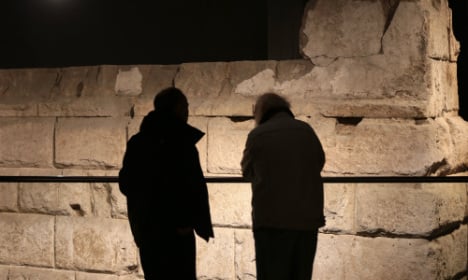 Not only is the six-meter-high wall the oldest stone structure in Germany, it’s the oldest north of the Alps, Markus Trier, director of the Roman-German Museum boasted on Friday.

While the people of the Orkney Islands in Scotland – where the stone walls of Skara Brae date back to 3,100 BC – might have something to say about that claim, the reopening of the wall will provide a welcome boost to Cologne’s tourism after a series of negative headlines for the city in recent months.

The wall is built on a foundation of oak, whose trunks were chopped down in the winter of 4 AD/ 5 AD. Tests on the wood have allowed researchers to exactly date the structure's origins.

“It is 100 percent certain [that it was built then]” Trier said.

Refurbishment of the fortification – which lies 15 metres under the ground – cost €800,000, with new lighting and the surrounding visitor experience also being modernized.

What remains of the wall was originally the lower part of a watchtower located on the south-eastern corner of a fortress the Romans built when they first attempted to subdue the Rhineland at the start of the first millennium.

Fifty years later the settlement was recognized as city, or Colonia, from where it derives its modern name.

The stone structure managed to survive because it was later incorporated into the city walls and so maintained a purpose.

“You have to imagine how the Celtic-Germanic population would have rubbed their eyes at the structure which was suddenly erected there,” said Trier, adding that Roman engineering know-how was only achieved again in the modern era.

In Cologne the ancient walls are known as the Ubier Monument, due to a mistaken belief that the Ubier who settled the area after the Romans left were responsible for its construction.