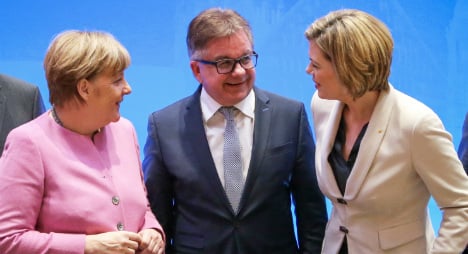 The answer: Germany's electoral calendar means the three states' polls are set to be the first real-world barometer of how Chancellor Angela Merkel's refugee policy has affected her governing Christian Democratic Union (CDU).

“New forms of political co-operation are tested, like the CDU-Greens coalition in Hesse or the Social Democratic Party (SPD)-Green coalition in Baden-Württemberg”.

State politics also sets the political alignment of the Bundesrat, the upper house of the German parliament, and provides an important recruitment pool for national politics.

A good result might be seen as an endorsement for Merkel that encourages her to stick to her chosen course. But if the CDU wakes up on March 14th to an electoral disaster, there would inevitably be accusations that the Chancellor had undermined her own party with her moral stand. This map shows where state elections will be held on March 13th. Rhineland-Palatinate in blue, Baden-Württemberg in yellow, Saxony-Anhalt in red. Image: Wikimedia Commons/The Local.

The biggest issue – the refugee crisis

Unsurprisingly, the refugee crisis has pushed other issues off the agenda ahead of the elections.

“The refugee crisis and the large support for the Alternative for Germany (AfD) is the dominant theme [in Rhineland-Palatinate and Baden-Württemberg], even though it's only indirectly related to state politics,” Professor Arzheimer said.

The scale of the refugee crisis and the New Year's Eve sexual assaults in Cologne have hit Merkel hard in the polls, and that's put the wind up CDU leaders in the south-west.

Both Guido Wolf in Baden-Württemberg and Julia Klöckner in Rhineland-Palatinate have called for tougher rules on asylum and refugees, including a fixed upper limit to the number who can enter Germany in any one year.

At the time, they were accused of 'stabbing Merkel in the back'.

But their main aim was to staunch the flow of conservative voters from the CDU to right-wing populist Alternative for Germany (AfD), which looks set to enter both state parliaments for the first time.

Meanwhile in Saxony-Anhalt, the refugee crisis has dominated debate despite its limited impact on the eastern state, Professor Wolfgang Renzsch of the University of Magdeburg's Political Science department told The Local.

“Saxony-Anhalt only has 4,000 refugees at this point. The uptake of refugees here has worked very well, more people are volunteering to help than demonstrating against them on the streets.

“But the refugees are a reason for people to feel afraid, even if they aren't a real danger,” he said.

Of course, there are other issues under discussion – German states have an extremely broad array of responsibilities, from infrastructure to agriculture to schools.

But “in both [Baden-Württemberg and Rhineland-Palatinate], the human question of who should be or remain minister-president is in the foreground,” Mainz professor Arzheimer said.

In Rhineland-Palatinate, 43-year-old Klöckner – seen by some as a potential successor to Merkel – is challenging Social Democratic Party (SPD) minister-president Malu Dreyer, 55.

It's led to some of the first woman-versus-woman TV debates for the state leader's office. Klöckner has a lot of catching up to do, though, as 50 percent of voters would prefer to see Dreyer remain in office while just 30 percent hope Klöckner takes over. Kretschmann remains highly popular among voters in Baden-Württemberg, with 64 percent saying they would like him to remain minister-president while just 17 percent think Wolf could do a better job.

What are AfD's chances?

AfD has developed from a single-issue anti-Euro party into a more broadly populist one, with demands for much tougher asylum and migration rules at the heart of its programme.

Polling at 13 percent in both Baden-Württemberg and 9 percent in Rhineland-Palatinate according to the latest Deutschlandtrend poll on Friday, it looks certain to overcome the 5 percent threshold needed to send representatives to the south-west's state capitals. That might block Klöckner or Wolf from taking the minister-president's office in either state, but is unlikely to upend regional politics.

The picture is different in Saxony-Anhalt, in the former East Germany, where AfD support is much more widespread.

“If the AfD achieves two-digit results, it will produce a political earthquake” in the state, professor Renzsch in Magdeburg said.

A legacy of broken promises

As one of Germany's economically weakest states – with the third-lowest GDP per capita in 2014 – Saxony-Anhalt is especially vulnerable to the appeal of right-wing populists, Renzsch argues.

Until the fall of the Iron Curtain, “the state in Eastern Europe [including the former German Democratic Republic] was seen as a sort of insurance agency that took care of everything,” he explained.

“The state was seen as infallible. Now the state has retreated from many areas and lost this protective function, but people still blame it if they have trouble finding jobs or a home, if their pension is too low or if they're unemployed.”

State politicians have regularly promised more than they can deliver in bringing back the imagined good old times, meaning “there's constant disappointment and frustration” with mainstream politics, he added.

This atmosphere allows far-right parties to capitalize on the idea that the state is providing services and support for refugees but not ordinary Germans.

At the moment, that's translating into 19 percent backing for AfD in recent polling.

As the Linke (Left Party) is polling at 21 percent, the CDU and SPD may not win the 50 percent of seats between them needed to keep up their current 'grand coalition'.

That could leave them having to build an unwieldy three-party coalition with the Left or Green parties in the Magdeburg state parliament.

What about national consequences?

Renzsch argues that while the reservoir of resentment and frustration that fuels the AfD will persist, it's not clear whether the party will survive for very long in its present form.

“They have internal disagreements, some people want to profit personally by winning public office, and in these parties there are often radicalization spirals,” he said. “Whoever shouts the loudest wins, but that can turn away voters”. AfD spokeswoman Beatrix von Storch caused a stir in January by suggesting police be allowed to fire on refugees at the border. Photo: DPA

For now, prominent politicians such as Bavarian leader Horst Seehofer are “legitimising” the AfD by taking up some of their talking points, Renzsch said.

But if Chancellor Merkel's hoped-for European solution to the refugee crisis finally crystallizes, support for further-right policies may ebb along with the numbers of refugees crossing the border.

In the south-west, meanwhile, Mainz's professor Arzheimer suggests that whatever the result the fallout will be limited.

“A bad result for Wolf or Klöckner would mostly have consequences for the candidates themselves,” he said, “although it would also strengthen criticism of Merkel within the CDU.”

If either of the two were to outdo expectations, “it would be to Merkel's benefit, as neither of the candidates has positioned themselves as a clear alternative to Merkel and neither has yet shown any national political ambition,” Arzheimer said.