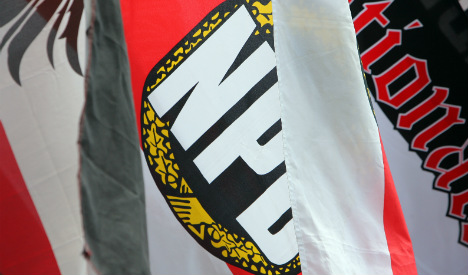 An NPD flag at a demonstration in 2008

Former party chairman Holger Apfel was a key witness in the hearings in Karlsruhe on whether the party should be banned as a danger to the Constitution.

But while Apfel confirmed the extremist quality of the party's thought, he added that its effectiveness was often overestimated by mainstream politicians.

Judges on Thursday appeared to share Apfel's doubts about the danger the party poses to democratic order in Germany, posing tough questions to state ministers who testified about NPD activities in Bavaria and Mecklenburg-Western Pomerania.

Bavarian interior minister Joachim Herrmann testified that while the NPD was not an electoral force in the Free State, its “incendiary talk” nourished the far-right scene there and created fear among the public.

“It's not a question of how big the party is,” Saxon minister-president Stanislaw Tillich told judges when challenged on the NPD's 5,200-strong membership roster.

“The question is what they do,” he said, arguing that the party intimidates ordinary people and threatens them.

Meanwhile, party officials maintained the ethnic rhetoric the NPD uses in public in their testimony.

Foreigners who had been naturalized in Germany might well enjoy citizenship, leading light Jürgen Gansel said on the stand, but they would never be a part of the “national community”.

Obstacles to banning a political party are so high that the last time it happened was in the 1950s.

The Bundesrat, Germany's upper house of parliament which represents the federal states, will have to meet a heavy burden of proof to convince judges its case against the NPD meets that standard.

Several reports from the Verfassungsschutz (VS), Germany's internal security service, have suggested that the NPD has little real-world impact or ability to stage political campaigns.

And stakes are high this time around. A previous attempt to ban the NPD failed in 2003 because of the presence of large numbers of informants in the party's hierarchy.

The states insist informants for the security services are no longer involved in setting policy at the NPD.

Now it's up to judges to decide whether a ban is justified – and whether they believe it will stand up in the European Court of Human Rights if they do pronounce one.