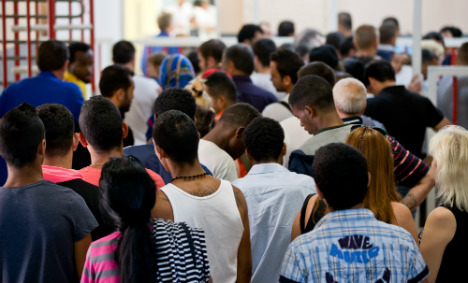 People wait in line at an asylum home canteen in Zirndorf, Bavaria, in 2014. Photo: DPA

“Anything more than [500,000 new applications] would mean a new backlog in applications,” Frank-Jürgen Weise, head of the Federal Office of Migration and Refugees (BAMF) told the Passauer Neue Presse.

While the BAMF has taken on more workers to deal with the increased numbers of applications in recent months, 370,000 cases are still awaiting decisions.

Weise – who took over at BAMF after his predecessor stepped down over the chaos at the authority – also believes up to 400,000 people already in Germany have not yet filed an asylum application but are likely to do so soon.

BAMF officials may be able to decide on around a million cases this year alone, Weise explained, but much more than that would strain the system and push some work back into 2017.

Workers at the refugee authority are using a recent dip in the number of refugee arrivals to make a dent in the backlog.

Weise also explained that the proportions have changed, with around 60 percent of the latest arrivals coming from Syria and Iraq and fewer from north African states like Algeria, Tunisia and Morocco.

That will be music to the ears of the German government, which plans to designate the north African nations as “safe countries of origin” and has been pressuring them to take back more deportees.

“We must send people back in significant numbers,” the BAMF boss said.

If those whose applications were rejected weren't sent home the public support for those in real need of protection would shrink, he added.