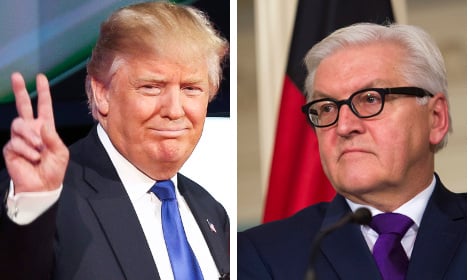 “Building walls is a very bad idea – no matter who pays for them,” Steinmeier told university students during a visit to Washington.

Let’s not retreat into politics of fear – Read speech by FM #Steinmeier at @ElliottSchoolGW https://t.co/Xj9NR5ZKrv pic.twitter.com/VWwrCP07Ta

Trump has vowed to build a giant wall on the country's southern border to keep migrants from illegally crossing into the United States and has promised that he will make Mexico pay for it.

As millions of Americans headed to the polls in primaries and caucuses in a dozen states on Super Tuesday, the billionaire real estate mogul was leading the race for the Republican nomination where immigration is a hot-button issue.

Steinmeier warned that the rise of populist parties and politicians in Europe and the United States could undermine “effective foreign policy in our Western democracies.”

“In Germany and in Europe, something is gaining momentum in our domestic politics – and to be honest, I am also seeing it here in the United States during the primary campaigns: It's the politics of fear,” he said.

“Let's guard against those politics of fear – they are dangerous for Europe and the US. They are bad for the world and, in the end, they will also be bad for our transatlantic relations.”

In Germany, anger over the arrival of some 1.1 million refugees last year has buoyed the right-wing Alternative for Germany (AfD) and sparked a surge in racist hate crimes.

Speaking at George Washington University, Steinmeier defended Germany's refugee policy as a “humanitarian duty” and said he was confident that his country could cope with the influx.

On Monday, Secretary of State John Kerry reassured Steinmeier of US support, calling the exodus of Middle Eastern refugees to Europe a “global challenge” and a “test for all of us.”

SEE ALSO: Here's what Trump would hate about Germany