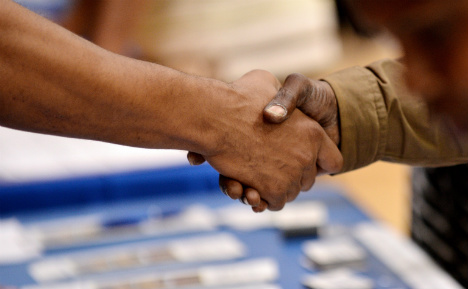 “If all goes well, they can start in three months,” said Juliane Hensel, who had just recruited the two men as security guards for her company City Schutz.

Their short conversation, which may turn out to be a game-changer for the two men, Muhammad Tahir and Muhammad Asjed, took place at a jobs fair in a Berlin hotel's massive conference hall.

More than 4,000 refugees were expected at the one-day fair to meet around 200 potential employers, ranging from online retailer Zalando and supermarket chain Rewe to florist Fleurop.

Tahir and Asjed arrived in Germany around a year ago and have been busy learning the language in a bid to find work.

“Germany did a lot for us, we want to do something for them,” said Asjed.

“We are serious about getting any good job, because we want to stand on our own feet and not depend on the German government,” he added.

Their potential employer will now need to secure approval from the state labour agency, run checks on their judiciary records, as well as provide training.

Hensel said her company has between 30 and 50 positions vacant in Berlin alone and views these employment fairs as a key recruitment opportunity.

After all, her company provides security for several refugee shelters, and the candidates at the fair have the necessary language skills.

In addition, “the people want to work and are greatly motivated, that's an enormous advantage for our sector,” said Hensel.

Some 1.1 million asylum seekers arrived in Germany last year alone, and for many, finding gainful employment is a key step towards regaining some normalcy in their lives.

Franziska Giffey, mayor of the Berlin district Neukölln which hosted the job fair, said it was time “we moved from the first phase of housing these people in need to the second phase of integrating them”.

Not only are the potential recruits keen, the employers too are eager.

Stephan Kuehne, who runs Flottwell Hotel in central Berlin, said he is ready to recruit anyone who has the qualifications and is motivated.

For him, the question of whether the candidate already has refugee status or is still in the process of applying for asylum is secondary.

“We are looking all the time for people… there aren't enough young people,” he said.

Europe's biggest economy has been struggling to shake off a chronic manpower shortage due to its ageing population and economists have warned that the situation will only worsen in coming years.

Although public scepticism is growing over Germany's ability to cope with the record influx of refugees, business leaders hope the newcomers, many of whom are young and rearing to go, will fill the employment gaps.

Nevertheless, the lack of German language skills is a handicap for many.

She left the fair empty-handed, but assured herself that this was just the beginning as she had arrived in Germany barely four months ago.

Wolf-Dieter Muenn, in charge of training at the building company B&O, also said he did not have unrealistic expectations.

His company is looking for apprentices in electro-technics. “If we could have three to five refugees, that would be good,” said Muenn.

A little later, he was engaged in an intense discussion about switch boxes with a young man, in a mix of German and English.

Maher Waked, who arrived in October with a diploma in mechanical design engineering, also viewed the fair as a first step.

“I may not be able to find a job today, but hopefully I'll get some contacts and advice,” said Waked, adding that his wife will join him “in a few months and we want to build a life here”.