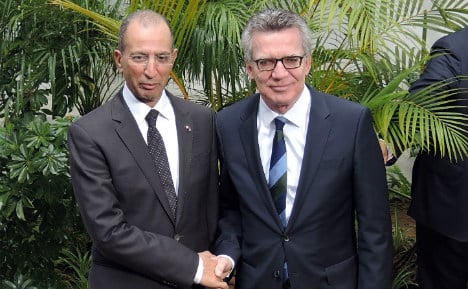 The a pledge was made by the Moroccan interior minister Mohamed Hassad after a meeting with German counterpart Thomas de Maiziere, who flew out to Rabat especially to pressure the Moroccan government into cooperating.

In recent weeks Germany has become ever more frustrated that many countries are refusing to take back their nationals once their asylum cases have been turned down in the Federal republic.

Last week Berlin fired off angry letters to the 17 countries it believes to be most reluctant to cooperate on the issue.

The Moroccan government was one of several north African states which received such a warning.

Hassad and De Maiziere agreed on Tuesday to concentrate on identifying those Moroccans who entered Germany in 2015 pretending to be Syrian.

Last year around 10,000 people from the north African kingdom arrived in Germany, according to figures from the Federal Office for Migration and Refugees.

But only 3.7 percent of Moroccans had their asylum requests granted and Berlin is considering naming Morocco, along with Algeria and Tunisia “safe countries of origin” – meaning that only in exceptional cases an asylum application would be considered.

Last summer several Balkan countries, including Montenegro and Albania, were deemed to be secure, leading to a sharp drop in asylum applications from these states.

Morocco is the first country in the North African region on de Maiziere’s itinerary, with the minister set to touch down in Algeria and Tunisia over the coming days.

In recent weeks police in Saxony and North Rhine-Westphalia have released crime figures showing that migrants from these countries commit a disproportionate amount of crime.

While Germany last week passed a new law making it easier to deport migrants convicted of even petty crimes, deportations also require cooperation from the migrant’s country of origin, something which has been a stumbling block for Berlin so far.