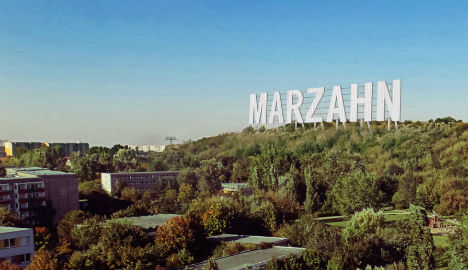 In future, as the sun will rise slowly above the east of Berlin, golden light scaling its hills and spilling onto the barren field of rooftops of multi-family housing, not only will it illuminate the concrete splendour.

Oh, no – from 2017 onward the life-size lettering “M-A-R-Z-A-H-N  H-I-L-L-S” shall adorn the highlands of the Ahrensfelder Berge, close to the German capitol's district of Marzahn-Hellersdorf.

That is if you are ready to become one of the letters' sponsors. The project “Marzahn Hills” started out as a fun idea in the summer of 2015 when someone suggested it against the backdrop of the upcoming International Gardening Fair 2017 (IGA) taking place in the infamous outskirt area of the city.

By now the endeavour has clearly picked up momentum, with the IGA-team even presenting it at the “Germany Travel Show” fair in London. The Hollywood-style sign aims at providing a different perspective on the district that is mostly known for its bleak Cold War-architectural buildings, the so called “Plattenbauten”.

At the moment the initiators are still looking for people to finance the venture. The individual letters go for a price that is not further specified, yet negotiable.

The project website states: “By becoming a sponsor of the M, you are contributing to the cause of Marzahn remaining known as Marzahn instead of Arzahn.”

And who wouldn't want to grant the East-Berliners some of that Hollywood glamour?