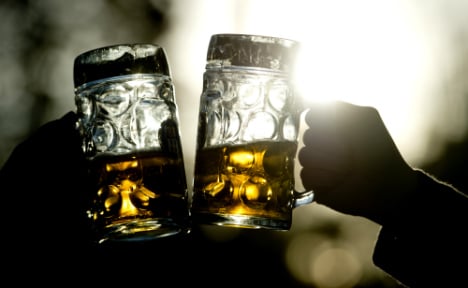 The Environmental Institute in Munich conducted the tests on the 14 beers with the highest sales figures in Germany and found that all of them contained traces of the pesticide.

The results showed that Hasseröder, a brewery in Saxony-Anhalt, had the highest intensity of the pesticide – with 29.74 microgrammes of the chemical per litre of beer.

The lowest levels on the other hand were to be found in the Bavarian Augustiner beers, which had a comparatively low 0.46 microgrammes of the pesticide in every litre of its amber brew.

But even this quantity is over four times the legal limit for drinking water which is set at 0.1 microgrammes per litre, Spiegel reports.

Coming in the year of the much celebrated 500th anniversary of the famed Beer Purity Law, the results couldn't be worse timed, and could tarnish German beer's worldwide reputation for quality as well as taste.

But the Association of German Brewers (BfR) denied on Thursday that the reported figures posed any risk to people’s health.

While saying that it had not seen the results of the testing, the BfR claimed that the reported levels of the pesticide lie well below what is currently considered to pose a health risk.

“For an adult to consume unhealthy amounts of Glyphosate, he would have to drink around 1,000 litres of beer a day,” the BfR said in a statement.

“According to current scientific understanding, a Glyphosate level of 30 micrograms per litre doesn’t pose any health risk,” they continued.

Debate is currently raging among health experts as to whether Glyphosate, made by controversial American agrochemical giant Monsanto, is safe to use.

In 2015, the World Health Organization (WHO) labelled Glyphosate “potentially carcinogenic.”

But the EU food safety authority Efsa came to a different conclusion, announcing it was “unlikely that Glyphosate poses a cancer risk to humans” – a conclusion which some researchers described as “scientifically unacceptable.”

With Monsanto’s licence to sell the pesticide running out in the summer, the European Commission will have to once again consider whether the product is safe for use in the EU.

The Environmental Institute in Munich say that the chemical could have been carried into the beer through hops or the cereals which are part of the ingredients, pointing out that “large scale use of Glyphosate is a daily part of crop production” in Germany.

The breweries must now look into “how Glyphosate could make it into their beer and to make sure that in the future their products are free from traces of pesticide,” the institute warns.

The beers which were tested were on sale in German supermarkets in December 2015 and January 2016.