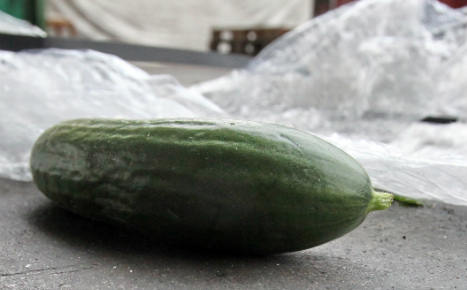 It was July 2014 and the couple met for their latest secret liason in an affair which had been going on for five years.

The 46-year-old’s wife and daughter were out of town and he had the apartment in Mannheim all to himself, Bild reports.

The couple met in the afternoon and, sitting in the living room, proceeded to drink their way through four bottles of wine and a significant quantity of Schnapps.

They then moved into the man’s study where things got intimate.

On the day in question “she didn’t have any of her toys with her, so I grabbed a half a cucumber from the kitchen,” the man said.

At this point the man noticed that smoke was drifting in from the kitchen.

“I’d forgotten that I’d put a piece of meat on the stove for my dog. It was burning. I ran into the kitchen, fed the dog and then smoked a cigarette on the balcony,” he told the court.

When he returned to the study he found his lover unconscious on the floor. The cucumber was still lodged in her throat and had cut off her air ways.

“I tried to pull the pieces of cucumber out of her throat. But they were so mushy I couldn’t get them all,” he explained.

Having not had any oxygen for minutes the woman fell into a coma. She later died in hospital.

In court, the prosecutor charged that the defendant's actions had been negligent.

“He should have known that he couldn’t leave her alone for so long,” state prosecutor Reinhard Hofmann said.

The judge is set to rule on the case on Friday and the defendant faces up to five years in prison.