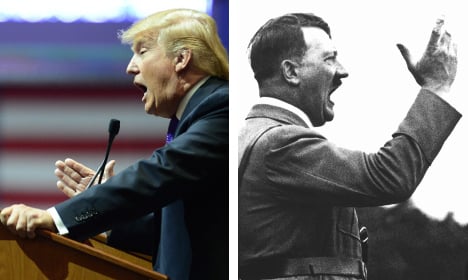 Yes, Trump recently said he pined for the good old days when hecklers would be taken out of a political meet on a stretcher. Yes, he's said he'd like all Muslims in the USA to be registered – and yes, he said he'd bring back waterboarding “and a hell of a lot worse.”

But no one has considered the other side of the argument. Here's six reasons they're nothing like each other. Donald Trump gets up close and personal with his daughter Ivanka. Photo: DPA

If there's one thing the world is definitely sure that Donald Trump likes, it's beautiful women.

The property magnate has three marriages under his belt and often lets his libido bubble over into very public assessments of attractive ladies – he's even suggested he'd date his own daughter.

“I was always of the opinion that aggression, sex drive, and everything that goes along with it was on the man's part of the table,” he wrote in his 1997 book The Art of the Comeback.

Meanwhile, many historians have suggested that Adolf Hitler was repulsed by sex – and may even have required injections from his personal doctor Theodor Morell to get in the mood.

Medical records recently unearthed suggest that there was truth to the British wartime song about the dictator having just one testicle.

Pride in being German

Despite actually coming from Austria, Hitler was obsessed with the superiority of the German people and could barely finish a sentence without blurting out a reference to the Fatherland.

In one of the most well known ironies of history the squat, dark-haired dictator proclaimed that only tall blond, blue-eyed people were true “Aryans.”

Donald Trump on the other hand is a tall, blond and has blue eyes, but is so ashamed of his links to Germany he tried to cover up his family heritage for years.

After originally trying to pass himself off as a Swede, the billionaire has more recently admitted that his grandfather did indeed come from Kallstadt in Rhineland-Palatinate.

Knowing where a border lies Trump's signature policy is, of course, the construction of a giant wall along the southern border of the USA to keep people from entering illegally.

“I will build a great, great wall on our southern border, and I will make Mexico pay for that wall. Mark my words,” he said in June as he launched his campaign.

Hitler, of course, was all for Germany having open borders – just as long as it was German soldiers and settlers streaming out rather than other people coming in.

The dictator's fondest dream was to acquire Lebensraum – living space – in eastern Europe and Russia where the German race could expand, at the cost of those already living there.

Playing down the size of part of their anatomy

Hitler is rumoured to have grown his moustache in order to disguise the size of his nose, which the Führer was rather bashful about.

Donald Trump would certainly never try and make part of his body seem smaller than it is. He once remarked “my fingers are long and beautiful, as, it has been well documented, are various other parts of my body.”

While independent parties have yet to confirm whether Mr. Trump has the bark to go with his bite, a new book suggests that Hitler suffered from a condition called hypospadias, leaving him with an abnormally small member.

Bridgehead into the UK Trump surveys his territories in the UK. Photo: DPA

His failure to invade the United Kingdom may have been one of the turning points that ultimately cost Hitler the war.

After his troops conquered France in the early summer of 1940, the Luftwaffe (German air force) fought a bitter battle with the Royal Air Force (RAF) for control of the skies that would become known as the Battle of Britain.

But try as the German pilots might, they never won control of the air, which would have allowed the Nazis to establish a bridgehead for invasion on the southern British coast.

Trump has already colonized his own little corner of Britain, building the Trump International Golf Links on the east coast of Scotland – which he has tried, unsuccessfully, to defend against the government's plans to build an offshore wind farm nearby.

Effect on the Frankfurt skyline

Hitler’s devastating war led to the destruction of the largest medieval city centre in Europe Germany.

The RAF and US Air Force bombed Frankfurt over six years between 1939-45, leaving most of the city little more than rubble.

Quite the opposite has been true of Trump, who planned to build the tallest residential building in the world in the German finance capital on the Main at the start of the millennium.

The tycoon eventually backed away from the project, possibly due to annoyance with Germany’s planning regulations. SEE ALSO: Here's what Trump would hate about Germany