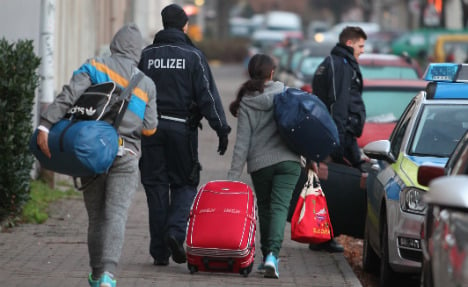 The letters were mostly sent to capitals in North and West Africa and in the Indian sub-continent, national daily Die Welt reveals.

Berlin is desperately trying to find solutions to deport the hundreds of thousands of migrants who have had their asylum applications rejected.

Last year only 21,000 of the 200,000 asylum seekers whose applications were rejected left the country, meaning 179,000 remain in Germany as so-called ‘tolerated’ people.

With hundreds of thousands of refugees who entered the Federal Republic during the course of the year still to have their applications decided on, this number is set to swell yet further.

The most common reason why Germany cannot deport people is that as many as 70 percent of asylum seekers arrive in the country without official documentation, making it extremely difficult for the government to find out where they are originally from.

Berlin has even been accused of paying other countries to recognize people as their citizens, resulting in people being deported to countries they have no attachment to.

But even if Germany does know where a migrant originally comes from, the problem of returning them home often does not end there.

States like Pakistan, Algeria and Tunisia refuse to cooperate with German authorities, despite being obliged by international law to comply.

North Africa is another problem region.

Interior Minister Thomas de Maiziere is travelling to the region at the end of the week to try and convince governments there to start taking more migrants back.

MUST READ: Germany orders one-year-old girl to leave within a week

With North Africans the problem is particularly urgent because migrants from there have often been associated with crime.

In Saxony, where the majority of Tunisian migrants are sent, authorities have reported that while Tunisians make up 4 percent of the migrant population, they are found guilty of a quarter of crimes committed by migrants.

Tunisians almost never have their asylum applications granted – only 0.2 percent  are successful. Nonetheless, of the 678 Tunisians told they wouldn’t be allowed to stay in Germany, only 66 have were deported in 2015.

Meanwhile the majority of asylum seekers from Morocco and Algeria have until recently been sent to North Rhine-Westphalia. Current investigations into robberies and sexual assaults during New Year's Eve show that most of the suspects for these crimes came from these two countries.

Die Welt reports that there are several of factors at play for why countries are so reluctant to take their citizens back.

For some it means the tiresome bureaucracy involved in tracking down their identity papers in chaotic state registers to verify who they are.

The illegal migrants are often also a boon for these developing countries if they stay abroad – as when they start to earn money in Euros they send part of it back to their families and feed into the local economy.

Thirdly, some states are reluctant to take back citizens who in some cases are associated with criminality and would be potential troublemakers back home.

Germany meanwhile is trying to create movement on the issue through a mixture of threats and bribes.

While vice-Chancellor Sigmar Gabriel has raised the possibility of development aid being withdrawn from serial refuseniks, the government has also told several African countries that if they started taking back migrants a “new phase” of relations will start “which will have positive effects on our future cooperation.”