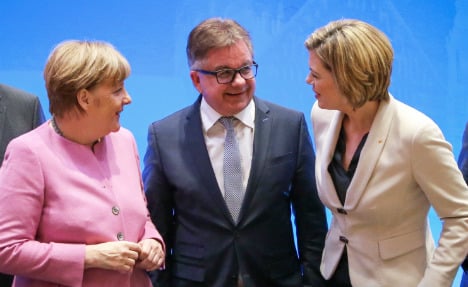 Over the weekend Julia Klöckner and Guido Wolf demanded in an open letter that the government implement daily quotas for the number of asylum seekers allowed into the country and set up processing centres at the country’s borders.

Merkel has long resisted demands from more hawkish members of her government that she impose an upper limit on the amount of refugees Germany takes in.

Klöckner and Wolf, both of the Christian Democratic Union (CDU), are vying to become minister-president – the German equivalent of governors – in state elections due to be held in mid-March in Rhineland-Palatinate and Baden-Württemberg.

Both candidates are fighting fiercely close contests and have the chance to win back control of the states for the conservative party.

In Rhineland-Palatinate, an INSA survey published on Monday puts Klöckner two point ahead of the Social Democratic Party (SPD) on 35 percent. In Baden-Württemberg Wolf lies half a point behind the ruling Green Party on 30 percent.

In the German proportional representation system parties try and form a coalition with junior partners which will give them a controlling majority in the parliament.

The open letter, demanding a stricter approach to dealing with refugees, has widely been interpreted as an attempt to win votesrs away from the Alternative for Germany (AfD).

Populist right-wing AfD have seen their poll share soar in recent months as large sections of the German public have grown sceptical of Merkel’s refugee stance.

In Rhineland-Palatinate the AfD are currently polling at 8.5 percent, while in Baden-Württemberg they are predicted to win 10 percent of the vote, according to INSA.

Those scores are comfortably above the five percent threshold needed to enter state parliaments – a first in the party's history in the two south-western states.

But Sigmar Gabriel, vice-Chancellor and SPD leader, accused Klöckner and Wolf of betraying their party leader at a time when she desperately needs their support.

“It’s neither smart nor decent to stab the German Chancellor in the back in the middle of European negotiations,” Gabriel told Spiegel Online, referring to last week’s EU summit in Brussels at which Merkel called for European solidarity in the refugee crisis.

Gabriel aimed his wrath particularly at Klöckner, who is also party deputy to Merkel at the national level – and seen by some as a potential future successor.

“Frau Klöckner is undermining the German negotiating position and she’s weakening the position of the German Chancellor,” Gabriel stated.

“We need to defend Europe’s external borders and to cooperate with Turkey on controlling people smugglers – we don’t need to follow some self-interested course like Austria or the eastern European states,” the vice-Chancellor said.

The two election candidates also drew fire from within their own party, with one European politician accusing them of “descending into panic” in the run-up to the state elections.

Merkel herself has so far stayed silent on Klöckner and Wolf's letter.