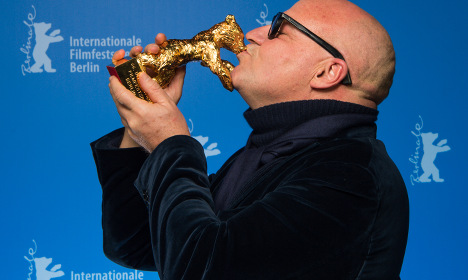 The Eritrean-born Rosi, who spent several months on Italy's Lampedusa making the film, dedicated the prize to its residents. Photo: Bernd von Jutrczenka/dpa/AFP

As Europe grapples with its biggest migrant influx since World War II, the picture by Italian director Gianfranco Rosi offers an unflinching look at life on the Mediterranean island of Lampedusa, where thousands of asylum seekers from Africa and the Middle East have arrived trying to reach the European Union over the last two decades.

Thousands more have perished on the dangerous journey in rickety, overcrowded boats.

The Eritrean-born Rosi, who spent several months on Italy's Lampedusa making the film, dedicated the prize to its residents “who open their hearts to other peoples”.

“I hope to bring awareness,” he said as he accepted the trophy from Streep.

“It is not acceptable that people die crossing the sea trying to escape from tragedies.”

The picture is told through the eyes of a 12-year-old local boy, Samuele Pucillo, and a doctor, Pietro Bartolo, who has been tending to the dehydrated, malnourished and traumatised new arrivals for a quarter-century.

In chilling footage, Rosi accompanied coastguard rescue missions answering the terrified SOS calls of people on boats, most of them arriving from Libya. Many of the vessels are packed with corpses of people who suffocated from diesel fumes.

Three-time Oscar-winner Streep said her seven-member jury was “swept away” by “Fire at Sea”, which she called “urgent, imaginative and necessary filmmaking”.

“It's a daring hybrid of captured footage and deliberate storytelling that allows us to consider what documentary can do,” she said.

“It demands its place in front of our eyes and compels our engagement and action.”

The Golden Bear for “Fire at Sea” comes after the Cannes film festival last May awarded its Palme d'Or to “Dheepan”, a drama about Sri Lankan refugees living on the violent outskirts of Paris.

Rosi, who captured the Venice film festival's 2013 Golden Lion for his film “Sacro GRA”, said when his film premiered that Europe's refugee crisis marked one of the worst humanitarian catastrophes since the Holocaust.

He told reporters after the awards ceremony late Saturday that he would aim to show the film to the people of Lampedusa in an open-air screening in the spring.

The festival, now in its 66th year, had placed a special spotlight on the refugee issue, after Germany let in more than 1.1 million asylum seekers last year.

Donations boxes to support charities helping torture survivors were placed at cinema venues, and festival internships and free tickets were reserved for migrants.

George Clooney, whose “Hail, Caesar!” opened the event, even met with German Chancellor Angela Merkel with his wife Amal “to talk about how best we can help”.

In other prizes, France's Mia Hansen-Love won the Silver Bear for best director for her drama “Things to Come” starring Isabelle Huppert as a philosophy teacher whose marriage falls apart just as her elderly mother dies.

Tunisia's Majd Mastoura won the Silver Bear for best actor for his role in “Hedi”, a love story set in the aftermath of the Arab Spring, which also won best debut feature.

“I hope we will continue on being free, being happy, producing good art.”

The Silver Bear for best actress went to Denmark's Trine Dyrholm for her role as a wronged wife in Thomas Vinterberg's “The Commune”, a semi-autobiographical take on his 1970s childhood.

Oscar-winning Bosnian director Danis Tanovic took the runner-up Grand Jury Prize among 18 contenders for “Death in Sarajevo” about the corrosive legacy of the 1990s Balkan wars.

A more than eight-hour-long historical epic by Filipino director Lav Diaz, “A Lullaby to the Sorrowful Mystery”, claimed the Alfred Bauer Prize for a feature film that opens new perspectives in cinema.

Best screenplay went to Polish filmmaker Tomasz Wasilewski, his portrait of the pivotal 1989-90 period in his country as told through four women, played by some of Poland's best-known theatre actresses, at crossroads in their lives.

The 11-day festival closes Sunday with screenings of the most popular featured films.