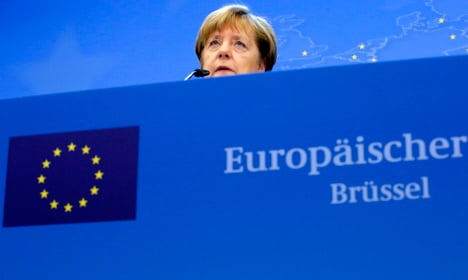 “I do not think that we gave too much to Great Britain,” she said.

British Prime Minister, David Cameron on Saturday embarked on a daunting challenge to persuade ministers in his own cabinet and the country at large to vote for Britain to stay in the European Union.

After a cabinet meeting, Cameron announced the date – June 23rd – for a membership referendum after striking a deal in Brussels that gives Britain special concessions.

The announcement of the date sounds the launch of a campaign that will be bitterly contested, with opinion polls showing Britons fiercely divided on the question and the media pouring cold water on Cameron's claims to have won substantial concessions from his EU peers.

Following the cabinet meeting, ministers who want Britain to become the first member state to leave the EU will be allowed to speak out for the first time.

Justice minister Michael Gove is expected to be one of around five or six ministers who will declare their support for a British EU exit or “Brexit”.

Much of the political suspense is over whether Mayor of London Boris Johnson, a popular politician from Cameron's Conservative Party, will join them.

“I will be campaigning with all my heart and soul to persuade the British people to remain in the reformed European Union that we have secured today,” Cameron told a press conference on Friday evening.

He said the deal contained a seven-year “emergency brake” on welfare payments for EU migrants and meant Britain would be “permanently out of ever closer union” — one of the EU's key objectives.

“Cameron's Climbdown,” read a headline on the Daily Express website, while the Daily Mail said: “Call that a Deal, Dave?”

The Daily Telegraph said Cameron had made “puny gains” and The Times called it “Thin Gruel”.

“From the land of chocolate, David Cameron was always destined to bring back fudge,” said The Times, which dismissed Cameron's drawn-out negotiations with fellow European leaders as “ill-disguised theatrics”.

He “has little choice now but to resort to the old argument that Britain's interests are best served by trying to reform Europe from the inside rather than submitting to the unknown rigours of full independence” an editorial said.

“He faces an uphill struggle making it.”

But the left-leaning Guardian daily said the deal was “a practical package” and “cannot be dismissed as a charade”.

The paper said it supported Britain staying in the EU “come what may”, urging undecided voters to examine the agreed reforms “very seriously indeed”.

The drama is only just beginning for Cameron, as he battles not only a hostile press but also eurosceptic members of his own Conservative party.

Daily Telegraph editor Charles Moore predicted: “From now on… the internal pains of the Tory party on this subject will be brought into the open.”

Anand Menon, professor of European politics at King's College London, said he expected both sides to emphasise the risks of either leaving or sticking with the status quo.

“This is going to be a depressingly negative campaign,” he told AFP.

Cameron will on Monday address parliament, which formally has to approve the date for the vote.

This will be Britain's second referendum on European membership in just over 30 years.

In June 1975, voters backed membership of the then European Economic Community (EEC) by just over 67 percent.

“There are no exceptions to the rules,” Hollande said

But Italian Prime Minister Matteo Renzi warned “there is a risk of us losing sight of the original European dream”.

During negotiations, France and Belgium strongly resisted safeguards for countries that do not use the euro.

European Commission chief Jean-Claude Juncker said the deal would give Britain no power of veto over the eurozone.

Britain and other “euro-outs” will, however, be able to raise concerns about eurozone policies at the level of EU summits.