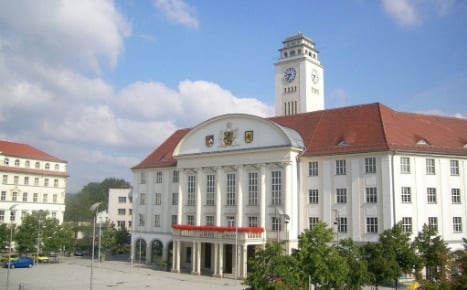 The town of Sonneberg lies a stone’s throw from the Bavarian border in Thuringia, the south-western-most state in former east Germany.

Thuringia in 2015 became the first state in post-reunification Germany to be governed by a first minister from the Linke (Left) party – part-successor to the Socialist Unity Party (SED) that ruled the former German Democratic Republic (GDR).

But now Sonneberg city authorities want to take their population of 24,000 and decamp to Bavaria, Germany’s richest state.

Or, more accurately, the town wants the borders to be redrawn so that Bavaria expands north and envelopes Sonneberg.

Deputy mayor Heiko Voigt explained to The Local that the reasons are economic and cultural rather than political.

“Sonneberg lies in an urban chain which takes in the cities of Coburg, Neistadt and Sonneberg,” the deputy mayor explains.

“This ‘metropolitan area’ has 100,000 inhabitants but is split in two by the border between Bavaria and Thuringia,” he says.

Most of Sonneberg’s economic relationships are to the south with Bavaria, not the north, he goes on, saying that when it comes to tourism, infrastructure and commuters, Sonneberg faces similar challenges and opportunities as its Bavarian neighbours. Now the Thuringian state government in Erfurt wants to make the situation even worse by redrawing internal county borders to rob Sonneberg of its position as an independent county and subjugate it to the town of Suhl, 50 kilometres to the north-west.

But it’s not just economic ties which bind Sonneberg to Bavaria.

The town belongs to the historic kingdom of Franconia, which stretches through much of northern Bavaria, and the locals speak the Franken dialect rather than the Saxon spoken in northern Thuringia.

Sonneberg was cut off from its brethren by the Iron Curtain, but has worked hard since the fall of the Berlin Wall to rebuild these cultural ties, Voigt says, adding that the plans to make Sonnenberg part of Suhl district would damage this hard work.

But the wish to jump ship strikes others as strange.

The Süddeutsche Zeitung reports that under communism an identity as being part of the east also developed in Sonneberg.

“While many may have an affinity to Franconia – it is harder to believe they see themselves linked to Bavaria, the land of Oktoberfest and Alpine panoramas,” the Munich-based paper writes.