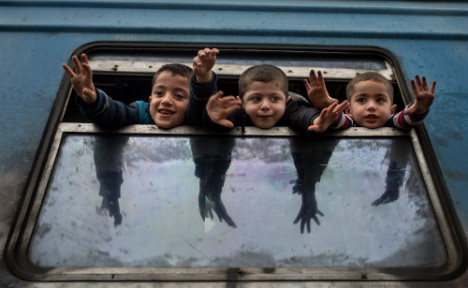 Since the summer Merkel has been desperately campaigning for an EU-wide quota system for divvying up refugees among member states.

And at an EU summit taking place in Brussels on Friday she once again finds herself fighting a lonely battle for solidarity on the issue.

Her efforts have come up against a stone wall of eastern European resistance, and the trial quota system agreed in September is yet to be implemented.

But a survey by the Bertelsmann Foundation shows that a large majority of Europeans back Merkel’s proposals – and this enthusiasm is even shared in the states which are fighting Merkel in Brussels.

The study showed that 79 percent of Europeans believe the EU should have a common migration policy, with 52 percent of people believing member states should surrender sovereignty on this issue to Brussels.

The same number of people (79 percent) said that asylum seekers should be distributed fairly among member states, with 69 percent agreeing that states which do not comply should be punished through the withdrawal of EU financial aid.

While this enthusiasm for a collective policy was strongest in the founding member states, a majority of respondents (54 percent) in the eastern European countries which joined the EU in 2004 also said they were in favour of a quota system.

This public sense of solidarity rubs up against the hawkishness of governments in Poland, the Czech Republic, Hungary and Slovakia – the so-called Visegrad Four – who have refused to take in their share of refugees under a trail quota system.

On the other hand, just 41 percent of people in new member states thought that countries which refuse to take their quota should be punished financially.

There was also widespread support for the principle of freedom of movement, currently threatened by Britain's demands to block welfare for EU migrants and border controls and fences springing up all along the refugee route, from Sweden in the North all the way to Croatia in the South.

A total of 79 percent of respondents said that they consider freedom of movement of great importance to the EU and that it should be defended at all costs.

In another ringing endorsement of Merkel’s call for solidarity, 87 percent of respondents said the EU said it had a duty to protect its external borders.

Speaking to the German parliament on Tuesday, Merkel said one of her key objectives was to protect the maritime borders of the European Union, rubbishing eastern European calls to build a border fence in Macedonia to prevent refugees travelling north from Greece.

“A continent that can't agree with its neighbours about this, that hides behind fences some distance back from the real border, that can't be the European solution. I am firmly convinced of that,” Merkel said.

In general, public support for further integration of member states in order to cope with these problems grew 2 percent on July 2015 to 60 percent, the survey revealed.

Germans contacted by the pollsters were most likely to favour a quota system and punishment of states which do not comply.

A total of 91 percent of German respondents said they believed asylum seekers should be distributed fairly between member  states.

Along with  Italians, that was the most comprehensive approval among respondents from the six largest countries in the EU (Germany, France, Italy, Britain, Spain and Poland).

Similarly 84 percent of Germans said that states which do not comply with quota rules should be punished financially. By contrast only 36 percent of Poles agreed with this statement.

But Germans also displayed a reluctance to be too liberal in granting asylum requests. Only 37 percent said the state should act generously, the lowest proportion of respondents in the six largest EU members.