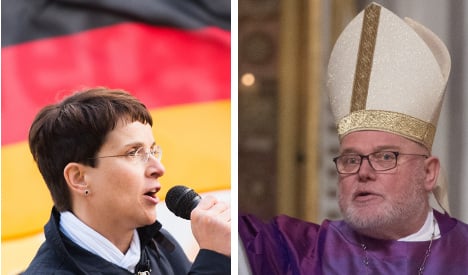 “I think the Church has a dishonest position on refugee policy,” Petry told the Stuttgarter Zeitung in response to Cardinal Reinhard Marx's accusation that she was dividing society.

“It's the Church that is tearing cracks [in society] by criticising us as inhumane as a political party and rejecting speaking with us,” she threw back.

“Human empathetic behaviour should be welcomed in individual cases… but that can't be a general solution for a country.”

Parties like the AfD were gaining strength from “fear that the state is losing control,” Marx, Germany's highest-ranking bishop, said on Wednesday in the Schontal monastery in Baden-Württemberg, where German Catholic bishops were meeting for their annual conference.

“Anyone who flees to Europe fearing for life and limb in their homeland has a right to our protection and fair proceedings,” Marx went on.

The Cardinal even seemed to go as far as offering support to Chancellor Angela Merkel, who hopes to prevail with her plan to address the refugee crisis at a European gathering of heads of government on Thursday evening.

“States all over Europe are called upon to make a proportional contribution to protecting refugees and [offering] asylum,” Marx added, saying that the Church fully supported the Chancellor's policy.

The Church and its charitable organizations deployed €112 million for refugee aid in 2015, Marx said.

AfD 'wants to be a national party'

Petry told the Stuttgarter Zeitung that her party's controversial statements – for example, when they called for lethal force to be used as a last resort at German borders – were a way of getting free publicity.

“It's not easy for a small party with limited resources to break through into the public debate… verbal provocations are therefore a part of it, although they can't be made for their own sake,” she said.

“We say things that our political competitors think are dangerous. Of course, I see that differently. The AfD addresses unsolved problems that have existed for a long time and are being hushed up by the other parties.”

And voters seem to be rewarding the AfD for its perceived honesty, as the pastry has leapt from around five percent in the polls for much of 2014 to double digits in early February.

“In the long term we want to become a large national party,” Petry said. “But there's a lot to do, for instance increasing the proportion of women [voters].”

A poll in late January showed that just two percent of women in Germany would vote for AfD compared with 17 percent of men.