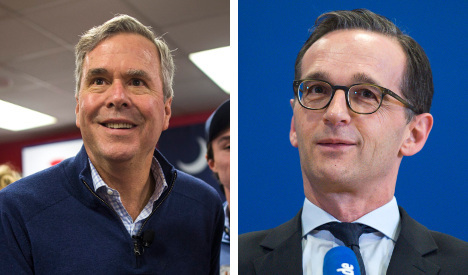 Jeb Bush's tweet simply read “America.” and included a photo of the former Florida governor's personal sidearm, engraved with his name and his office.

Supporters showered the tweet with likes – reaching almost 19,000 by late morning on Wednesday.

But the tweet also turned into a snowballing Twitter row, provoking mass outrage and an outpouring of parody.

German Justice Minister Heiko Maas apparently couldn't resist getting involved in the mess, copying Jeb's tweet but replacing the pistol with the Bill of Rights.

It looks like an attempt to show that Germans value America's long history of constitutional democracy more than the nation's – to Europeans – puzzling attachment to machines that put small pieces of metal into other people very fast.

When contacted by The Local, a spokesman for the Berlin Justice Ministry simply said that “the tweet speaks for itself”.

SEE ALSO: Here's what Donald Trump would hate about Germany

ELECTION
Germany warns Russia it will ‘defend itself’ against targeted disinformation in election year
Url copied to clipboard!