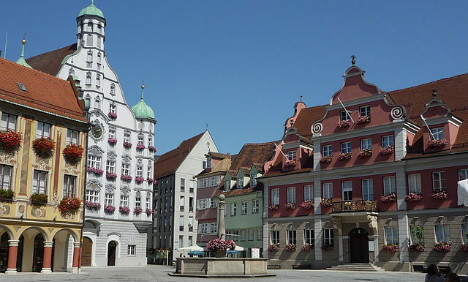 Johannes Leichtle never set out to visit Memmingen, a small Bavarian town just across the border from Baden-Württemberg.

He was coming back from a business meeting in nearby Kempten, when he thought he’d make a stop-off in the town to size it up as a location for his business events company to use.

But one suspicious pedestrian whom he asked for directions thought he was sizing it up for much more nefarious reasons.

“I asked her for directions to the town hall,” Leichtle told The Local. “She said it was about 200 metres away across the market square. I then asked her whether the square was the biggest in town and she said yes.”

The businessman drove on, parked his car, and went off to scout out the location.

Little did he know that his probing interrogations about the minutiae of the town layout had aroused the woman's suspicion. She appears to have immediately informed the police.

The coppers picked up the trail without delay. As soon as Leichtle jumped back in his car and made to leave the town, they made their move.

One police car pulled him over. But within a minute three more were on the scene, and Leichtle found himself surrounded by eight officers.

During the search of his car several suspicious objects were found. Several electric cables which Leichtle explained he had used at a previous event. Then there was his mother’s home grill, wrapped in a plastic bag and a freezer bag with meat inside.

Interrogations as to the purpose of the grill and the freezer bag turned up no leads and the police were finally convinced that Leichtle had nothing to hide and he was allowed to go on his way.

“I don’t blame the police. they were just doing their job,” he says, before adding “they were kind and friendly throughout.”

He says the woman was the one who overreacted, supposing that his dark skin – and perhaps his Stuttgart accent – had set alarm bells ringing.

Although he is German, Leichtle says his olive complexion makes him look perhaps north Italian, but nothing more exotic than that.

Ultimately, he says, blame lies with the media.

“Maybe everybody is just panicked at the moment. The media is making everybody crazy.”

“On every talk show on television, every day the only thing people talk about is the refugees. It’s not necessarily negative reporting, it’s just too much.”

“Hopefully this funny story will help people see things from the other side,” he muses.