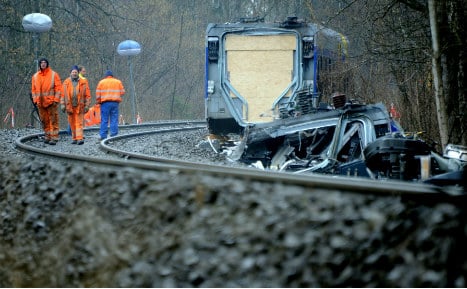 An investigation has now been opened into the actions of the controller who was in charge of the stretch of track in Bad Aibling south-east of Munich on the day of the fatal crash.

If the controller “had acted according to the rules and according to his duty, the collision would not have happened,” lead prosecutor Wolfgang Giese said in press conference held on Tuesday afternoon.

“There is no evidence of technical problems… Our investigation shows that this was human error with catastrophic consequences,” he added.

The case involves suspicion of negligence rather than premeditation and comes with a sentence of up to five years in jail, Giese said.

DON'T MISS: Bavaria train crash: what we know so far

But he cautioned that investigations were still ongoing.

“Were still trying to put all the pieces of a huge puzzle together. Then we’ll explain where we stand and what the situation is for the accused,” Giese explained.

At around 6.50 am on Tuesday February 9th, am two Meridian commuter trains collided head-on into one another on a single-lane stretch of track just outside Bad Aibling.

According to a statement by the transport minister last week, neither train braked, with both travelling at up to 100 km/h.

The two trains bored into one another at high speed, leaving a mangled snarl of wreckage that took rescuers hours to penetrate and recover the dead and wounded.

It left tough questions to be answered about the safety of the German rail network, which is fitted with safety equipment that is supposed to make head-on collisions impossible.

'No grounds for custody'

Unconfirmed media reports suggest that the controller mistakenly allowed both of the trains onto the track at the same time and tried without success to alert the drivers once he had realized his mistake.

The 39-year-old controller has not been arrested, Die Welt reports.

“One shouldn’t assume that there are grounds for putting him in custody,” said the prosecutor, adding that he had been taken to a secure location for his own safety.

“He’s not doing well,” but he is available at any point to be questioned,” Giese said.

“I can’t talk about the current stage of questioning,” another prosecutor Jürgen Branz said, explaining that the suspect’s account must compared with available evidence.

Prosecutors have found the suspect’s testimony credible, saying “no alcohol or drugs or something like that” were involved, although they said they were still waiting for the results of a blood test.

The investigation has involved 71 witness interviews, all of whom were passengers on the two trains.