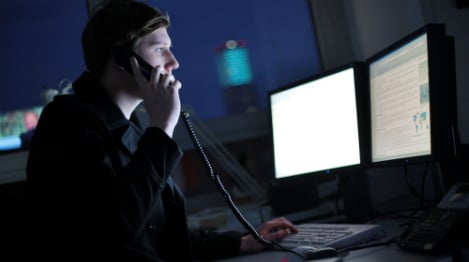 Working deep into the night - but is it healthy? File photo: DPA

According to the DGB, around half of those working more than 48 hours per week are suffering from overwork.

And men are more likely to work overtime than women, with 37 percent of men reporting weeks longer than 45 hours compared to 24 percent of women.

“The numbers from the study lead us to suspect [that overtime is] a mass phenomenon,” said labour market expert Holger Schäfer of the Institute for the German Economy (IW) in Cologne.

Schäfer noted, though, that overtime was only truly widespread in a small number of fields, especially those most vulnerable to competition – such as industrial businesses.

Financial or social services workers, by contrast, were much less likely to work overtime´, Schäfer said.

“If you end up with a lot of overtime [in these sectors] it's much more likely down to bad human resources planning,” he added.

That was borne out in the DGB study, which found that transport and logistics workers were the most likely to work overtime, with 54 percent of workers reporting it – compared to just 23 percent of finance and insurance workers.

Most workers not overwhelmed

Expert Enzo Weber of the Institute for Labour Market and Career Research (IAB) notes that in 2014, the average employee worked 46.7 hours of overtime – or around one hour extra per week.

That figure has remained relatively stable since German reunification in 1990, Weber said, noting that “in calmer times, employees scale back their overtime”.

What's more, Weber added, “there are employees who are happy to take home the financial boost” from paid overtime – which accounted for just a little less than unpaid overtime in 2014.

Pushing back boundary of private life?

But the DGB sees things differently.

“Many employees don't willingly work above and beyond 45 hours a week,” DGB board member Annelie Buntenbach said.

And those employees who work longer hours are also more likely to bring work home than those who work 44 hours or fewer – leaving less and less time for them to rest and recover. In the DGB study, 57 percent of those working more than 45 hours a week said they often didn't have enough time for family and friends – more than twice the figure for those working 35-44 hours.

“A work structure that supports health must include the possibilities of bodily and mental regeneration,” the DGB argued in its paper.

“Over-long working hours are quite obviously a factor that seriously undermines the chance to recover… the limitation of 'work without end' is a central challenge for creating humane working conditions.”

Researcher Weber agrees that “the clear division between job and private life is being weakened,” leaving the possibility for some people's lives to be totally dominated by work.

“One employee might be happy to be sat at his computer in the late evening, while another feels extremely stressed out by it,” he said.

What's more, higher-qualified workers are much more likely to have a fluid division between work and free time, with work becoming an integral part of the professional's lifestyle.

High-ranking employees in leadership positions were much more likely than their subordinates to do overtime, with almost one-eighth – 12 percent – working more than 55 hours per week.

“[Some] people like their jobs and are simply happy to do them,” Weber said – making the assessment of overwork a totally subjective one.

In the end, it's a question of treating workers on a case-by-case basis. “Overtime can become a problem, but it doesn't have to,” he concluded.

Is there a topic you'd like us to cover in JobTalk? Get in touch at the email address below!