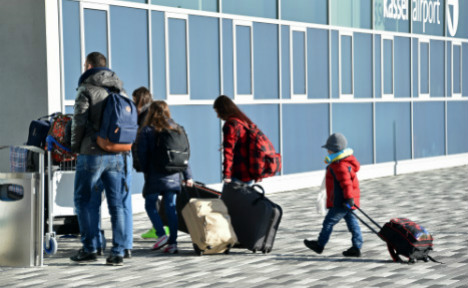 Edona has only known life in Germany.

Twenty months ago she was born in the Sauerland region in the west of the country, eleven days after her parents Eduart and Franga arrived from Albania seeking asylum.

On Thursday, Edona received an 11-page letter from the Federal Office for Migration and Refugees (BAMF) explaining that she had one week to leave the country, Rhineland paper Der Westen reports after seeing the document.

To her family it seemed that Edona was being forced out of the country because she was born in the Bundesrepublik and therefore could not prove that she faced persecution at home.

“A concrete and individual fear of persecution could not be found for the applicant,” the letter stated, before explaining “persecution cannot exist due to the fact the applicant was born in Germany and at no point has been in Albania.”

If Edona does not comply, she will be deported, the letter warned.

The case was picked up by local media as an example of the unbending hand of German bureaucracy. For the family, it would have meant all of them leaving, as sending their young daughter to Albania alone wasn't an option.

But the story turns out to be more of an example of the chaotic state of affairs at the Federal Office for Migration and Refugees (BAMF).

A spokesperson for BAMF admitted to The Local that it was actually a mistake in sending out letters – the whole family had had their applications rejected, but for some reason only Edona had been informed,

“The fact that were are dealing with such a high number of asylum applications and that we have to come to so many decisions is to blame,” BAMF's Christoph Sander said.

The law on minors is very he clear, he emphasized, saying that they cannot be deported separately from their parents.

BAMF is currently struggling under a backlog of around 370,000 asylum applications, the Rheinische Post reports, with a further 400,000 who arrived in 2015 still to even hand in their applications.

The federal office has taken on extra staff over the last few months to try and fight through the piles of paper work and hopes to decide on a further half a million cases in 2016.

Since the summer of 2015 Germany has considered Albania a “safe country of origin”, meaning that an asylum seeker from there has to prove a specific threat against their person in order to claim refugee status.

Edona’s parents made an asylum application in 2014 which sought to prove that they are threatened with a blood feud from a neighbouring family.

According to Heinrich Nolte, the ex-mayor of the town in North Rhine-Westphalia where the family live, they are totally integrated.

Both parents have full time jobs and do not use state welfare, Nolte told Der Westen. Their six-year-old son Edjon goes to the local primary school, and Eduart sings in a men’s choir.

BAMF had not responded to a request for comment from The Local by the time of publication.