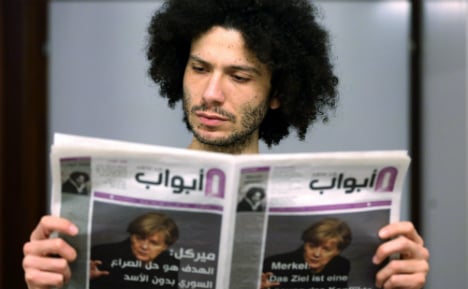 Ramy al-Asheq’s laptop isn’t playing ball. He wants to show a cartoon that is set to appear in the next edition of Abwab, but the computer isn’t doing anything. It loads and loads before the picture finally appears.

The adoptive Colognian has a good sense for how the discussion about refugees in Germany is currently playing out, how it is perceived by refugees themselves and what one can occasionally make a joke about.

The Syrian-Palestinian journalist is editor-in-chief of Abwab, an Arabic-language newspaper for refugees that is on sale nationwide in Germany.

“We want to have our own insight on current events,” al-Asheq says. He is sitting in his apartment in a high-rise in Cologne. In the corner there is a globe and on the desk there is a German-Arabic dictionary.

The apartment is Abwab’s HQ. The authors are spread out across Germany, with the 26-year-old al-Asheq steering the ship from the Rhineland metropole.

One section of the paper is dedicated to news from the Arabic-speaking community in Germany. Most refugees still can’t speak any German, says al-Asheq, who himself still uses lots of English.

“There is lots of false information being spread on Facebook,” al-Asheq says, adding that one role of Abwab is to work against this.

The paper also covers important news from the Arab world as well as German news. In the edition that came out after New Year, when hundreds of women reported being sexually molested by Arab-looking men, a female Syrian author wrote about sexual assault.

Al-Asheq and his colleagues also see themselves as fulfilling an educational role. They want to explain Germany. What is Karneval in the Rhine? Why does the first article of the constitution talk about human rights and not the president’s religion? Or more practically – where should I register when I arrive in Germany?

The 26-year-old fled the civil war in Syria where he had been imprisoned for demonstrating peacefully against Syrian president Bashar al-Assad.

In 2014 he was awarded a scholarship by the Heinrich Böll Foundation and came to Germany. Since he has arrived he has written several books.

The war and destruction that are taking place in his homeland still play a great role for him – and also for his newspaper.

“The Germans rebuilt their country from zero. Or even from less than zero,” he says, arguing that anyone able to understand a little bit of the success of Germany can one day bring it back to his homeland.

Abwab is handed out wherever refugees live. It comes out once a month and is free – because it's completely financed through adverts.

The impetus came from industry, the newspaper's marketing manager Necati Dutar explains, saying that printers are interested in tapping into the growing Arabic-speaking community in Germany.

The first issue appeared in 2015 and was sponsored by firms from the telecommunications and money transfer sectors.

Armin Scholl, a media specialist at the University of Münster, sees Abwab as contributing to integration.

“It helps new arrivals to find their feet,” he says.

But although the newspaper offers a sense of normality in a new country, there is also the risk that reading Arabic media could undermine people’s desire to integrate themselves into German culture, Scholl cautions.