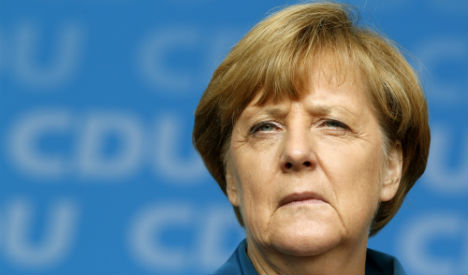 German chancellor Angela Merkel will struggle to pull the deal she wants from her European partners. Photo. Roland Weihrauch/dpa

Merkel is battling for a deal that will see refugees more evenly spread around the European Union after Germany welcomed 1.1 million asylum seekers last year.

French Prime Minister Manuel Valls said Saturday that the mood in France was “not favourable” to Merkel's call for a permanent quota system.

“Europe cannot take in all the migrants from Syria, Iraq or Africa,” Valls told German media. “It has to regain control over its borders, over its migration or asylum policies.”

US Secretary of State John Kerry praised Merkel for showing “great courage in helping so many who need so much” amid “the gravest humanitarian crisis in Europe since World War II”.

But he also told the Munich Security Conference that the mass influx spells a “near existential… threat to the politics and fabric of life in Europe”.
Another guest in Munich, Russian Prime Minister Dmitry Medvedev, took a far darker view, charging that “it's quite simply stupid to open Europe's doors wide and invite in everyone who wants to come to your country”.
“European migration policy is a total failure, all that is absolutely frightening,” he told the Handelsblatt daily.
A number of EU nations that were once in Russia's Cold War orbit seem to agree. Hungary, Poland, the Czech Republic and Slovakia plan to meet Monday to discuss how to close down the main refugee route through the Balkans, reported Germany's Spiegel news weekly.
“As long as there is no common European strategy, it is legitimate that the nations along the Balkans route protect their borders,” Slovak Foreign Minister Miroslav Lajcak told the magazine.
He also opposed Merkel's plan for an EU quota system, saying “quotas only increase the incentives for migration”.
At the other end of the route, Austria's foreign minister warned Macedonia on Friday that it should be ready to close its border to migrants coming up from Greece.
Vienna also plans to impose a cap on refugees and may start turning them away in the coming months.
Merkel, long dubbed the “Queen of Europe”, has seen poll numbers drop at home, coalition members rebel and EU allies duck away as the refugee crisis has sparked deep discord and threatened the bloc's system of open borders.
She has pledged to reduce arrivals by more quickly turning away “economic refugees” and combating traffickers, including through a new NATO surveillance mission in the Aegean Sea.
Meanwhile, her government has urged fellow Europeans to remember their core humanitarian values.
“How can a continent of 500 million citizens see its foundations shaken… by 1.5 million or 2 million refugees?” said Defence Minister Ursula von der Leyen in Munich.
Merkel said Friday there was “a group of countries” that may voluntarily accept more refugees in exchange for redoubled efforts from Turkey to tackle illegal immigration.
She did not name the members, but at a EU summit in December, Germany gathered officials from Austria, Belgium, Finland, Greece, Luxembourg, the Netherlands and Sweden.
Merkel is planning to bring together what the media have dubbed a “coalition of the willing” on the margins of a two-day EU summit in Brussels starting Thursday.
She suggested its members could help Turkey's refugee effort beyond the three billion euros ($3.3 billion) already committed by the EU. Turkey, which is hosting over 2.7 million mostly Syrian refugees, has voiced deep frustration with the EU as a fresh wave of Syrian refugees mass on its border.
Angry over calls that Turkey should do more, President Recep Tayyip Erdogan said last week that his nation could throw out its existing refugees, threatening to fly and bus them to Europe.
“We do not have the word 'idiot' written on our foreheads,” he said. “We will be patient, but we will do what we have to. Don't think that the planes and the buses are there for nothing.”