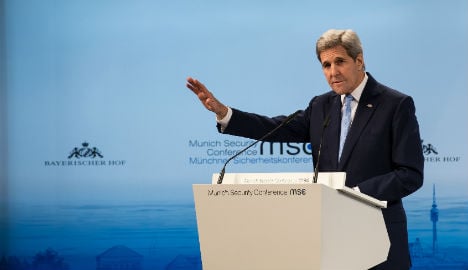 US Secretary of State John Kerry speaks at the Munich Security Summit. Photo: Andreas Gebert/DP
Speaking at  the Munich Security Conference, Kerry praised German Chancellor Angela Merkel for showing “great courage in helping so many who need so much” and European communities who are taking in those fleeing the violence and “rejecting intolerance and racism” within their societies.
But he warned that the mass influx of refugees and other migrants into Europe spells a “near existential threat” to the continent.
“We are facing the gravest humanitarian crisis in Europe since World War II,” he said at the conference, which has been dominated by the Syrian conflict.
“The United States understands the near existential nature of this threat to the politics and fabric of life in Europe,” he told the meeting.
Europe has been deeply split by how to handle the mass influx of people fleeing war-torn Syria, Iraq, Afghanistan and other countries.
Germany took in 1.1 million refugees last year, while Italy and Greece have been overwhelmed as the main arrival points from the Middle East and Africa.
Sweden and Austria have also taken in large numbers, but many EU members, especially in the east, have been deeply reluctant to open their doors.
French Prime Minister Manuel Valls said Saturday that the view in Paris is “not favourable” to Berlin's call for a permanent quota system to distribute more refugees across the EU, adding that France had already agreed to take in 30,000 refugees.
Kerry said about the refugee influx: “We are not saying, 'This is your problem, not ours'. This is our problem. And that is why we are joining now and enforcing a NATO mission to close off a key access route,” he said of an alliance naval surveillance mission off Turkey and Greece.
“And we will join you in other ways to stem this tide because of the potential of its damage to the fabric of a united Europe,” he added.