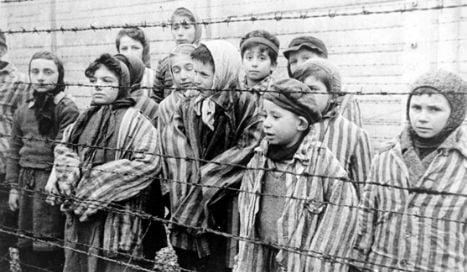 Child survivors of Auschwitz, photographed by the Belarusian army. Photo: Mikhael Oschurkow
Jakob Dencinger, who had been living in the eastern city of Osijek, died in hospital on Thursday, the local Glas Slavonije newspaper reported.
In 2014, Croatian prosecutors said they had placed him under investigation after his name reportedly figured on a list of people compiled by special German prosecutors in charge of investigating Nazi war crimes.
The Nazi-hunting Simon Wiesenthal Center had at the time urged Croatian authorities to move quickly, saying that “people who served as guards in the largest mass murder factory in human history” did “not deserve any sympathy due to age or to frailty”.
Dencinger was born in Osijek, where he served in Hitler's notorious Waffen-SS.
He moved to the United States after the war and worked in business until 1989, when judicial proceedings were launched to strip him of his US citizenship due to his Nazi past, Croatian media reported.
He then returned to his homeland. Since the allegations against him became public he had refused to leave his apartment in Osijek and declined requests for media interviews.