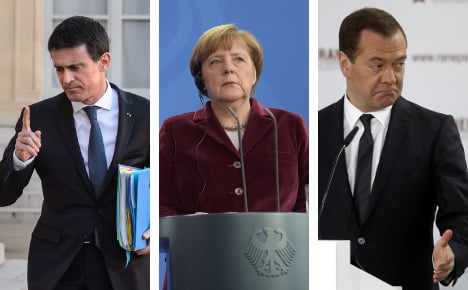 “This policy, which is justified temporarily, is unsustainable in the long term,” he told German regional media group Funke, pointing to the limited capacity not just in Germany, but also across Europe, to receive newcomers.

“We have to say this clearly: Europe cannot take in all migrants from Syria, Iraq or Africa. It has to regain control over its borders, over its migration or asylum policies,” said Valls, who is travelling to southern Germany to attend the Munich Security Conference.

The French prime minister's criticisms, which are due to be published on Saturday, came after his Russian counterpart Dmitry Medvedev lambasted Merkel's asylum policy.

“It's quite simply stupid to open Europe's doors wide and invite in everyone who wants to come to your country,” Medvedev said in an interview to be published this weekend by the economic daily Handelsblatt.

“European migration policy is a total failure, all that is absolutely frightening,” Medvedev added.

But there was no sign of backing down from Merkel's government on Friday.

Defence Minister Ursula von der Leyen warned that Europe's deep divisions on how to handle the mass refugee influx are playing into the hands of the Islamic State jihadist group.

“The historic mission of Europe for the past 70 years, to be a symbol of freedom and values, threatens to be drowned out by xenophobia and nationalism,” she said in an opening speech at the Munich Security Conference.

“This is grist to the propaganda mill of the IS. European division plays especially into the hands of those who want to corrode European unity – from within and from outside.”

The minister urged a determined fight against IS, but also greater humanity for those on the run from war.

“How can a continent of 500 million citizens see its foundations shaken and capitulate by 1.5 million or 2 million refugees?” she asked.

Opposition has been growing within Germany against Merkel's decision to open the doors to those fleeing war and persecution.

The chancellor has pledged to “tangibly” reduce the number of migrants and asylum seekers arriving this year with a range of measures in Germany, on the European level and with the help of international partners such as Turkey.