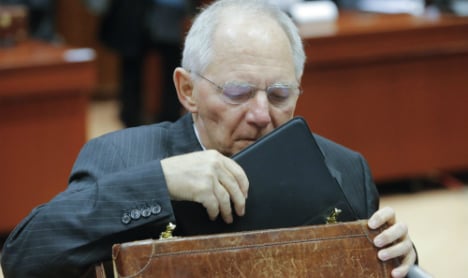 Finance Minister Wolfgang Schäuble had some grim reading in his briefcase this week. Photo: DPA

It’s the same old problem: not only Germans are living longer than ever before, they’re not producing enough offspring to replace them in the workforce.

The result will be levels of debt reaching 220 percent of Gross Domestic Product (GDP) by 2060 – well above the 60 percent limit for EU member states set out by the Maastricht Treaty in 1992 – experts from inside Wolfgang Schäuble's finance ministry have calculated.

The report is likely to be of particular concern to Schäuble, Germany's stern faced Finance Minister, who has blasted other European countries for their unsustainable levels of debt – and insists on Germany sticking to the “schwarze Null” (black zero) – a policy of having zero deficit.

There are “serious risks to the sustainability of debt” the report warns, adding that if the government doesn’t act now, it will lead to “an unbearable debt build up which will limit the state’s ability to act.”

Short of an unlikely upturn in the birth rate in Germany – it has one of the lowest in the world – the finance wonks argue that the only way to avoid Germany’s impeccable budget figures turning red is to start cutting its debt burden now.

But to do this would require budget cuts in the region of €7 billion a year, starting immediately – and that’s according to the finance report's more optimistic scenario for the future.

Should their more pessimistic predictions come true Germany would need to start saving around €23 billion annually.

The report remains unpublished and is set to be discussed by the cabinet in the coming weeks.

SEE ALSO: Five reasons why Germany is so worried about Deutsche Bank