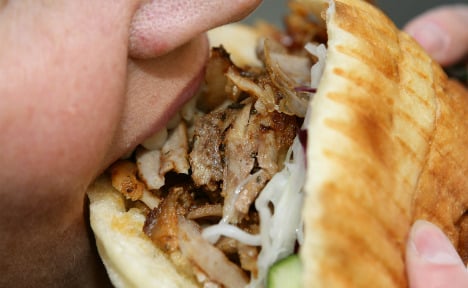 The 57-year-old started tucking into the Turkish meal of roasted meat inside a slice of bread as soon as he got onto the bus, despite the bus driver reminding him that it was against the rules.

When the bus reached the next stop the stubborn customer still refused to give up his dinner, and the driver demanded that he leave the vehicle. Instead the man attempted to hit the driver, police record in a statement.

The driver refused to be cowed, and called the police. But when the cops arrived the man still refused to give up his Döner or leave the bus, forcing police to drag him from the vehicle.

The driver has now made an official complaint to law enforcement of breach of the peace and bodily harm.

A spokesperson for Berlin police could not give The Local exact numbers on how often officers are called to resolve food infractions, but said that “again and again BVG (Berlin Transport Company) workers call the police because of violence against them.”

He said though that this was more usually caused by alcohol abuse or aggressive teenagers than an unusual love for the Döner sandwich.

It's a far cry from the relaxed attitude promoted in BVG advertising.

A rap the transport company released in December told customers it “didn't care” about dozens of weird things Berliners might do on buses and trains – although a spokesman did tell The Local that it wasn't meant to be taken completely seriously.

Berlin police themselves might have been looking enviously at the man’s obviously delicious meal.

Their union complained on Thursday that they were served food that was four months out of date during a deployment last weekend.

Berliners' love of the Döner meanwhile is well documented, as a recent rap video titled “With all the trimmings”, which has clocked up quarter of a million hits in less than a week, shows.

While not wishing to condone rowdy bus passenger’s actions, we’d sure like to know where he got that Döner.