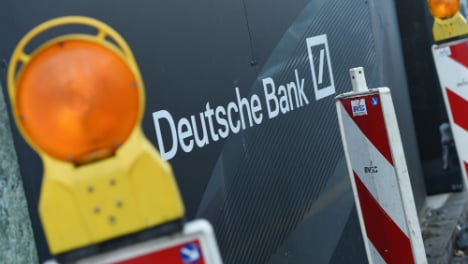 1. It's shrinking after two decades of expansion

Deutsche grew quickly over the past 20 years as it sought to challenge some of the world's biggest investment banks – mostly in the US.

But that strategy hasn't worked, and last June its former co-CEOs announced they were stepping down. New CEO John Cryan, a Brit with a reputation for turning around struggling businesses, started in July.

By October , faced with the bank's biggest-ever quarterly loss of €6.01 billion, he was already announcing thousands of job cuts, hundreds of branch closures, and withdrawal from 10 countries.

Many investors feel unsure about how exactly Deutsche plans to make money in future – and the tumbling share price reflects that uncertainty.

Cryan's move to shrink the bank has come at the same time as market upsets caused by low oil prices, fears for the Chinese economy, and continuing problems in the Eurozone.

That's all bad news for Deutsche Bank's investment arm – which was Cryan's big hope for bringing in cash from now on.

3. Everyone is protesting too much

Senior figures at Deutsche and even German Finance Minister Wolfgang Schäuble have all tried to reassure investors, workers and account holders about the future of the bank in recent days.

The bank is “absolutely rock-solid,” Cryan said in a statement on Tuesday, while Schäuble told Bloomberg he had “no concerns” about the banking giant.

But the flood of insistence that everything is fine seems to be having the opposite effect to what they hoped.

The price of insurance against Deutsche failing to pay its debts – so-called “Credit Default Swaps” – has doubled in recent days.

4. It's hitting Germany as a whole

The likelihood of the German government defaulting on its debts spiked on Tuesday to its highest levels since 2014 (although it's still very low, at 1.7 percent).

That's despite new rules introduced since the financial crisis which require banks to have more money on hand, meaning that theoretically at least Berlin should not be left on the hook if Deutsche's debts are called in.

For the world's fourth-biggest economy, a loss-making top bank is a liability – especially when US rivals like JP Morgan are valued ten times higher on the stock markets and are back to making healthy profits.

One route out of Deutsche Bank's woes might be for a wealthy new owner to take it over and put it through the arduous restructuring it needs.

But few financial institutions have the patience and the deep pockets that would be needed to get the floundering giant back on track. It will take quite a lot of these to get Deutsche Bank back on track. Photo: DPA

The same new rules that make it less likely for banks to default also make them less profitable – and therefore less attractive to buyers.

That's even the case when the bank's current stock market value is just 35 percent of the value of the assets on its books.

“I don't think anyone wants to take over an investment bank at the moment,” one large shareholder in Deutsche Bank told Die Welt on Wednesday.