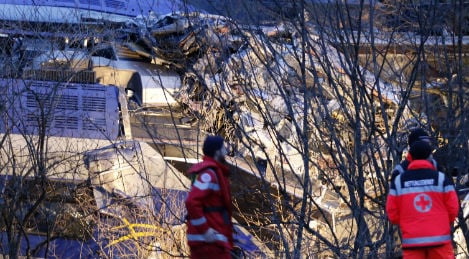 Rescue workers stand in front of one of the wrecked train wagons on Tuesday evening. Photo: DPA

“10 victims (no more to be expected), no-one is missing, detective investigations are ongoing,” Upper Bavaria police tweeted early on Wednesday.

Work at the crash site outside Bad Aibling, where the two commuter trains hit each other head-on, was suspended overnight after the eleventh victim – the last missing person known to have been involved – was found.

As well as the ten people killed, around 80 were injured in the worst train accident in Bavaria since the 1970s.

Recovery operations were set to resume at dawn on Wednesday, with the stretch of track where the accident happened still blocked to other traffic.

Heavy machinery will need to be brought in to remove the twisted wreckage of the two trains, which authorities said on Tuesday were likely travelling at a relatively high speed at the time of the impact.

Citing “reliable sources”, press agency DPA reported that the track was caused by “human error”, although no further details were available.

Attention had previously focused on the PZB safety system fitted to the majority of Germany's rail network, which is supposed to automatically brake the train if its driver doesn't acknowledge a red signal.

But a spokesman for rail operator Deutsche Bahn said on Tuesday that the system had undergone regular maintenance just a week before and no problems were reported.