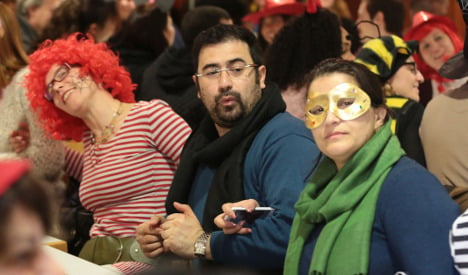 A charity-hosted "Karneval for Beginners" class for refugees in Cologne. Photo: DPA.

When longtime Cologne resident Heide Strauch saw reports of a backlash against immigrants after hundreds of women reported being sexual assaulted by men of “north African or Arabic appearance” over New Year, she said she “woke up”.

“I had to do something,” Strauch told The Local at Karneval this weekend.

Police have reported gangs attacking immigrants in the centre of the city and far-right groups are widely seen to have used the events of New Year as fuel for their anti-immigrant stances.

So Strauch helped put together a small group of Germans and refugees from a local shelter to celebrate Karneval together. But the group was met with some antagonism, Strauch said, as some yelled slurs as the refugees walked with the group on Friday on the way to watch a parade in the Alter Markt.

“It’s the power of thoughts, that means if I tell you that you are bad, at some point you will start to believe it,” says Strauch. “It is very important that we fight against this… people can learn to say 'no, I am good'.”

One of the refugees, Atif, had come from Pakistan after fleeing the Taliban. With arms around each other’s shoulders, Atif and the group swayed together as the locals among them bellowed drinking songs in the Kölsch (Cologne) dialect.

Reactions to the events of New Year have been diverse, with Strauch's group at one end of a wide spectrum.

One Rhineland town 30 kilometres outside Cologne decided to temporarily ban male refugees from public pools after some women reported being harassed.

Another town north of Cologne cancelled its Karneval plans altogether due to fears that what happened in Cologne and elsewhere could happen there.

Cologne itself stepped up security measures with a very visible police presence this year, setting some 2,500 officers on duty for the celebration that ended on Tuesday.

Officials also set up security points aimed at giving women a place to feel safe and report any sexual assaults.

Flyers passed around in German, English and Arabic explained to revellers when, where and what Karneval is, proclaiming “Anyone can join the party during Carnival!”

But others, like Strauch, took a more personal approach to integrating immigrants into the Karneval culture. Her group shared beers with Atif, whose country of Pakistan does not allow Muslims to acquire alcohol permits, though many still drink homemade liquors.

Some groups placed signs around the city to promote tolerance, with slogans like “Karneval with love – without sexism and racism,” and others saying “Jecken [Karneval revellers] of the world are welcome!”

“A Karneval with love – without sexism and racism.” Photo: Emma Anderson

The Catholic charity Caritas also held a class called “Karneval for Beginners” which explained the customs of Cologne’s biggest party to more than 100 refugees and integration class students before the fest kicked off.

Another group called “Refugees and Colognians for a peaceful Karneval,” helped refugees pass safely through the area around the central train station and answer questions people had in their native languages.

“There were a few Germans and around 30 refugees involved,” organizer and Tunisian refugee Fahed Mlaiel told The Local. “We all celebrated together… it's important that we all celebrate and live together.”

Still, there were some bars in Cologne that turned away refugees, even when with groups of non-refugees, citing security concerns.

But that didn’t stop some like Atif from Pakistan from celebrating with their new friends.

“Karneval is really great,” he told The Local. “I feel very good here.”

The “Karneval for Beginners” class hosted by Caritas. Photo: DPA.