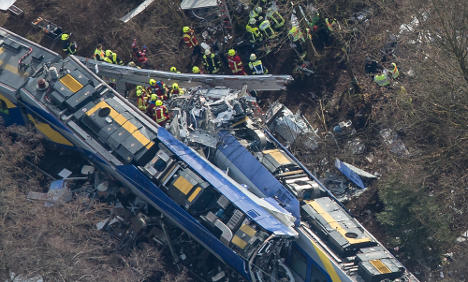 An aerial shot shows the extent of the devastation at the crash site, where two trains ran into one another head-on on a single-track rail line just outside Bad Aibling. Photo: DPA

17:43 – Bavarian Interior Minister Joachim Herrmann told broadcaster Bayern 2 that the number of people killed in the crash now stands at 10.

Police later confirmed that one of the people injured in the crash had died in hospital on Tuesday afternoon.

16:38 – The recovery operation is beginning, with workers moving to dismantle the overhead power lines on the track where the accident occurred. Heavy machinery can be brought in to lift and remove the smashed train wagons.

15:02 – “This is a tragedy for our whole country,” Bavarian minister-president Horst Seehofer has said. “It fills us with sadness and horror.”

14:50 – “I trust that the responsible authorities will do everything to find out how this accident could have happened,” Chancellor Angela Merkel said in a statement.

“My sympathy is with the families of the nine people who have lost their lives. My thoughts are also with the many injured people who are struggling with the consequences of the accident,” Merkel added.

“We should thank the first response and rescue units from the whole region, who cared for the accident victims under difficult conditions, for their tireless work.”

14:46 – The Munich Blood Donation Centre posted on Facebook that it has enough volunteers for today to help the victims of the crash – but will still need donations in the coming days.

The organization's hotline and website were both taken down by the flood of volunteers on Tuesday.

14:39 – Deutsche Bahn's general manager for Bavaria has said that the PZB safety system on the stretch of track where the accident happened was checked just a week before and no problems were found.

13.49 – At a press conference by the the Federal transport minister Alexander Dobrindt and Bavarian interior minister Joachim Herrmann, both politicians spoke of their shock, while refusing to speculate on the cause of the crash.

“It's a horrifying image what's going on there. Shocking the way the two trains have crashed into each other… the cabins of the second train have been totally torn apart.”

The transport minister said that each train could have been travelling at up to 100 km/h given speed limits in the area.

And because the crash was on a curve, there was probably no visual contact between the two drivers until moments before the crash, leaving them no time to brake before colliding.

“Our thoughts and prayers are with the victims and the relatives. It's a difficult time in the history of rail travel in Germany. This is one of the biggest accidents of recent years,” he added.

Dobrindt pointed to a possible technical malfunction in a detection system which should have prevented the collision.

The affected stretch track uses the PZB90 system, which is supposed to automatically detect trains and force them to brake if they pass a red signal, he explained.

The system was brought in across Germany after a crash in Saxony-Anhalt in January 2011 in which a driver drove through two red signals, leading to ten deaths.

Government officials are currently examining evidence including black boxes to try and find answers, he said.

“Right now all we can do is wait for the results. My impression from everything I saw and spoke about on the scene, is that people are working their hardest to find out the cause of the accident.”

“Over the decades, a lot has been invested in technical equipment and I had been almost convinced in recent years that such a thing could never repeat itself.

“Despite all that, two trains have collided at high speed that shouldn't even have been on the same stretch, and now we are mourning nine deaths, making it all the more tragic.”

Hermann described how the worst injured people had to be rescued like in the mountains, using a helicopter, more than 10 of which were deployed.

He also pointed out that most of the rescue teams were volunteers and thanked them for their “fantastic” effort.

12:54 – Updated figures from the police show a slightly smaller number of injuries than previously thought – but two people are still missing:

12:34 – Federal Transport Minister Alexander Dobrindt and Bavarian interior minister Joachim Herrmann are visiting the scene of the crash and thanking police and other rescue workers.

12:20 – The Austrian state of Tirol has said it will keep a group of 750 refugees who were due to cross into Bavaria on Tuesday on its side of the border following the train crash.

11:46 – Bavarian interior minister Joachim Herrmann says that the Bad Aibling crash is “one of the largest train accidents in the recent past in Germany, and especially here in Bavaria.”

11:33 – The Munich Blood Donation Service is in great need of donors today with more than 100 people hurt in the train crash.

“We ask you to take note of one of our scheduled mobile donation times or to come to our blood donor centre,” they ask on their website.

“We say a heartfelt thank-you on behalf of the sick and injured people who desperately need your donation!”

11:20 – Among the four additional casualties reported since 9:39 am are the second train driver and both train attendants, police told the Münchner Merkur.

11:19 – Anyone concerned about loved ones who may have been involved in the crash can get in touch with local police using the number below.

11:08 – Police now say that they have recovered eight bodies from the wreckage of the two trains. The spokesman said that the search for the dead and injured is finished.

Overview 11:00 – The crash took place at around 7 am near Bad Aibling, about 60 kilometres south-east of Munich in the southern state of Bavaria.

Two trains taking commuters to work collided head-on into one another on a stretch of track where there was only one set of tracks, local media outlet Rosenheim24 reports. The exact cause of the crash remains unclear.

But regional broadcaster Bayerische Rundfunk reported that police estimates of the toll had reached eight killed shortly before 11am.

Meanwhile, police told the Merkur newspaper in Munich that there were likely more casualties in parts of the train they hadn't yet reached.

Broadcaster Bayerische Rundfunk tweeted that one of the trains' drivers was confirmed dead, while the other remained missing by 10.15am.

There were also no school children in the train because Bavaria is currently celebrating the Fasching holiday.

“This is a huge shock for us. We're doing everything we can to help passengers, relatives and employees,” Meridian said in a statement.

“We are deeply shocked by the accident,” rail operator Deutsche Bahn (DB) CEO Rüdiger Grube said in a statement. “Our thoughts are with the loved ones of the dead and with the injured.”

Federal Transport Minister Alexander Dobrindt is expected to arrive on the scene of the crash at around midday.

Emergency services are at the scene, but full details of the incident are still to emerge, reports the Süddeutsche Zeitung.

“There are many people who have been lightly injured, eight people were seriously injured,” a police spokesperson told the Munich-based daily.

Police tweeted at 8.45 am that rescue operations were under way “at full speed” with over 100 emergency service vehicles in operation.

“Anything that has wheels is on the scene,” the German Red Cross (DRK) manager for Roseinheim told DPA. Ambulances stand ready near the site of the train crash in Bad Aibling on February 9th. Photo: DPA

There were also large numbers of helicopters on the scene of the crash to bring first responders and deliver the injured to nearby hospitals.

A reporter for national broadcaster ARD on the scene said that as it was impossible to land at the crash site itself, rescue teams were abseiling out of hovering helicopters to bring the injured aboard. A helicopter carries a medic close to the site of the train crash in Bad Aibling, Upper Bavaria on Tuesday. Photo: DPA

A press conference is scheduled for noon on Tuesday in the Bad Aibling town hall, where rescuers will offer more information.

Notable train accidents in Germany over past two decades

June 1998 – Eschede (Lower Saxony) – A high speed intercity train lost a wheel leading to a carriage derailing at 200 km/h. The carriage crashed into a road bridge which collapsed on two other carriages. A total of 101 people died, with 88 seriously injured. It was the worst rail disaster in German history.

April 1999 – Wuppertal (North Rhine-Westphalia) – A train on the overhead rail in the western town derailed after a it hit a steel nut which had been left on the track during repair works. Five people were killed and 49 were seriously injured.

September 2006 – Lathen (Lower Saxony) – A train collided with a work carriage on the test rail for a magnet based overhead rail system at 160 km/h. Twenty three of the 31 people on board lost their lives, 10 were seriously injured.

April 2012 – Offenbach (Hesse) – A regional train crashed into a repair train leading to 3 deaths and 12 injuries.

May 2015 – Osnabrück (Lower Saxony) – A train collided with a lorry at a level crossing. Two people were killed and around 20 were injured.

November 2015 – Greihung (Bavaria) – Two people died when a train collided with US military transport vehicle which was stationary on a rail crossing. 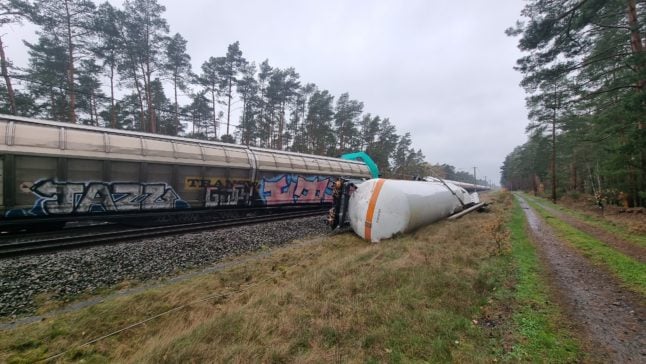