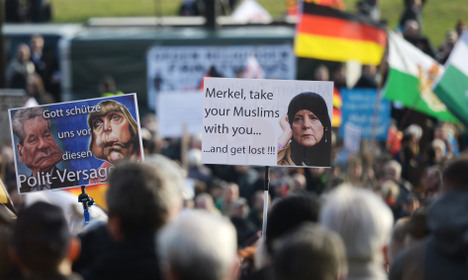 Pegida supporters took to the streets of a number of other European cities, including Prague and the northern French port of Calais, home to the infamous “Jungle” refugee camp for migrants seeking passage across the Channel to Britain.

Pegida and fellow anti-Muslim groups called the rallies following last month's signing of an agreement to create a “Fortress Europe” coalition against a backdrop of Europe's worst refugee crisis since World War II.

Several thousand Pegida supporters turned up in Dresden under clear blue skies in the early afternoon to march along the banks of the River Elbe, which flows through the city, to protest against mass immigration and the “islamisation” of Europe.

Police, who deployed around 1,000 officers for the occasion, said Thursday they expected some 15,000 marchers to show up.

An AFP reporter said several thousand had answered the rallying call an hour after the event began at 1400 GMT.

Many held aloft banners criticising German Chancellor Angela Merkel, who is in the firing line for her liberal stance towards refugees, now increasingly coming in for criticism after Germany took in more than a million migrants last year.

Around 2,000 people — less than the 10,000 expected by police — meanwhile joined an anti-Pegida rally at which participants urged tolerance towards migrants.

Anti-Pegida marchers chanted slogans including “no place for Nazis” and “we don't need xenophobia, demagoguery or Pegida.”

Pegida supporters counter that they are “European patriots against the islamisation of the west.”

On January 23rd, they issued a call for supporters to march in 14 European cities.

The Calais march brought some about 20 arrests, local authorities said, and police responded with tear gas after scuffles broke out. Another rally in the southern city of Montpellier drew barely 200 people by mid-afternoon.

In Prague, however, 5,000 people joined a rally organised by two far right groups, an AFP journalist said. Police arrested four people, a spokesperson said, without giving an estimate of the number at the demo which also attracted a counter rally.

In Dublin, scuffles broke out between people who had gathered to protest against the launch of Pegida in Ireland, and those who attended the launch of the group.

Elsewhere, in Amsterdam riot police arrested more than a dozen demonstrators both from Pegida and those opposing them in central Amsterdam. Both groups consisted of a few hundred protesters each.

The anti-Pegida group put up a large black and yellow banner saying: “Refugees welcome” while on the pro-Pegida side, protesters waved Dutch flags and banners saying: “Islamists not welcome”.

Police asked Pegida supporters to board buses to leave area “for your own safety.”

In Birmingham in central England, meanwhile, police said about about 150 Pegida supporters and 60 counter demonstrators turned out.

Other demonstrations took place in Warsaw, Bratislava and in Graz in southern Austria.