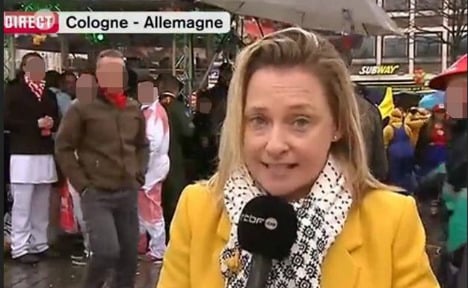 “At first they were just making faces behind me. Then a hand landed on my breast. I was was shocked,” said RTBF journalist Esmeralda Labye, describing the incident that took place in the Alter Markt district of town.

The chances of the two men being caught are high – the whole incident was caught on camera. Police are now investigating the case.

A section of the video seen by The Local shows a man of European appearance making lewd gestures behind the reporter. The full video is no longer available online.

“My piece to camera was chaotic, people showing middle fingers, a man who was having fun miming a sex act behind me and above all the hand placed on my breast,” Labye said when reporting live in a later news bulletin.

At time of writing, authorities had not released any information about the identity of the men.

The city of Cologne has apologized to Labye.

A report released by Cologne police on Friday morning said that there had been 18 sexual assaults, up to and including rape, in the city on the first night of carnival.

Spiegel reported that 22 cases of sexual assault had been reported by the afternoon – an increase of 13 on 2015.

Michael Temme, police director in Cologne, attributed this to the increased preparedness of women to report sexual assault.

In one case a woman reported a bouncer for offering her the choice between paying €25 entry to a club or giving him a “Bützje” – a traditional Karneval kiss.

“I don't want to play down the incident,” Temme said. “But it shows women are more prepared to report incidents.”

Police confirmed to The Local that they had arrested a 17-year-old asylum seeker on suspicion of committing rape.

Bild reports the man knocked a 22-year-old woman unconscious at around 3 in the morning on Friday before raping her and fleeing the scene. Police would not comment on these details.

Police said they had arrested 181 people over the course of the night, stepping in early to nip confrontations in the bud.

“Unfortunately the potential for aggression increased in the evening hours with the increased alcohol consumption,” the report read.

“The officers on the ground had to step in more and more frequently to prevent escalations.”

As well as the sexual assaults, there were 143 cases of bodily harm and 30 robberies, with a total of 224 crimes reported.

Officers had to defend themselves in 13 cases and 11 were slightly injured, the report added.

A total of 2,000 officers were patrolling the streets, double the number in 2014.