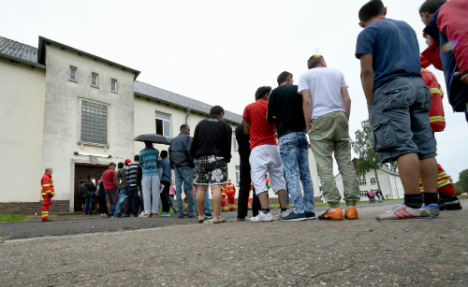 “Between 670,000 and 770,000 people who arrived in Germany in 2015 still had not received the final decision on their asylum applications” and a majority have not even been able to file their applications, said Frank-Jürgen Weise, who heads the Federal Office for Migration and Refugees.

“It's an unacceptable situation. It's serious and unacceptable for people to have to wait so long. It's bad for the prospects of integration and also bad for the job market when it takes so long,” he added.

Before an asylum application can be filed, newcomers have to first be registered by the authorities before they are sent to states across the country according to a proportional quota system.

Upon their arrival in the state they have been assigned to, they can then file their applications.

Weise said that between 300,000 and 400,000 refugees in Germany have still not even been registered.

The authorities were meanwhile running a backlog of 370,000 applications at year's end, he added.

Germany has been struggling to cope with 1.1 million asylum seekers in 2015 and Berlin has introduced a raft of measures aimed at slowing the influx.

In January, the number of new arrivals reached 91,674, about 28 percent fewer than in December. Syrians fleeing a brutal war in their homeland remained the biggest group of newcomers with 35,822.

'Migration flow from Turkey must be reduced'

The huge flow of migrants and refugees to Europe via Turkey must be slowed, the interior ministers of France and Germany said Friday after inspecting registration facilities in Greece.

The goal “cannot just be to register arriving refugees and to relocate them equitably (but above all) to reduce the flow,” German Interior Minister Thomas de Maiziere said at the close of the two-day visit.

De Maiziere and his French counterpart Bernard Cazeneuve stressed that there was room for improvement in coordinating security databases on Europe's borders.

Data from the passport-free Schengen zone must include “terrorism (records) by police and intelligence agencies, and conditions must be created to link the Schengen system to other criminal records,” Cazeneuve told reporters.

Facing its gravest migration challenge since World War II and beset with internal divisions on the issue, the European Union has been struggling for a response to the crisis since last year.

Greece, which is handling the bulk of refugee and migrant arrivals from neighbouring Turkey, has pledged to speed up the completion of registration centres known as hotspots after coming under strong criticism from Brussels last month.

The Greek army has been brought in to overcome delays in finishing the hotspots on the five principal Aegean Sea islands that saw over 800,000 arrivals last year.

Greek Defence Minister Panos Kammenos has promised that the hotspots will be operational by February 15.

The hotspots have been held up by bureaucratic delays and in the case of Kos island, strong opposition from the locals.

On Friday, local residents attempted to stop construction work on the facility and clashed with riot police, the state Athens News Agency said.