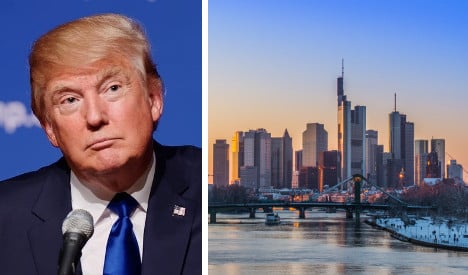 Real estate tycoon Donald Trump's hopes were as high for his construction project for Frankfurt in 2000 as they are now in his US presidential bid.

The billionaire was creating a buzz across Germany at the time with his plans for a “Trump Tower Europe” to be the tallest residential building in the world.

Also known as the Millennium Tower, the building was set to reach 97 stories into the sky at a height of 369 metres. It would have been taller than the current highest skyscraper in Europe, the Mercury City Tower in Moscow.

Trump met with the mayor of Frankfurt, Petra Roth, at the time to discuss the project in his office in Trump Tower on Fifth Avenue in New York.

He was “very American” in his demeanor, Roth told the Frankfurter Allgemeine Zeitung (FAZ) this week of the meeting.

“Yes, and he loved beautiful women, that’s what he also said,” Roth continued. “And of course the things with the mega-high building: as tall as possible, easily costing 1.5 billion Deutsche Marks, preferably directly on Mainufer, and finished by 2006 or 2007.”

A picture of the two shaking hands conjured excitement in Frankfurt and beyond.

But even though Trump and Roth met again to talk about the tower, no formal agreement was made. Trump even visited the site in the Europaviertel where the city planned to grant a permit.

But the real estate mogul eventually backed away from the project, dashing the hopes of Germany's financial hub. FAZ suggested that his reasons could have included the city’s restrictions on tall buildings or officials changing his desired location for the building.

Hopes for the Millennium Tower to emerge on top of the world still lingered in Frankfurt after Trump bowed out, but the financial crisis in 2008 has made the prospects even less likely.

But what if the Trump Tower Europe had come to be?

“Frankfurt would be today another city entirely. And Donald Trump possibly its citizen,” wrote FAZ. “If he only had the chance to naturalize himself after a few years, then perhaps he would compete to be Petra Roth's successor, with the battle cry 'Make Frankfurt great again!'”

A 2001 model of Europaviertel with the Millennium Tower. Photo: AS&P/Wikimedia Commons.