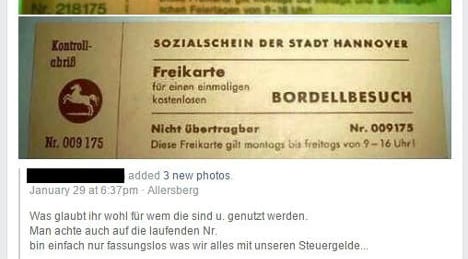 Photos of the “brothel passes” have been shared on right-wing sites, showing coupon-like slips of paper declaring a “free ticket for a one-time complimentary bordello visit” from various social services offices.

“I find this crazy,” wrote one member of the Facebook group called PEGIDA + Official Fan Group on Monday.

But as the German-language anti-Internet abuse initiative Mimikama reported recently, these tickets are fakes that have been popping up as a hoax for years.

One pass allegedly from Bavaria’s Social Services Office states that the coupon is non-transfereable and valid Mondays through Fridays as well as on Christian holidays between 9am and 4pm.

But the state of Bavaria does not have a centralized social services office.

According to Mimikama, such passes have been showing up on humour sites like Lachschon.de since at least 2011 – long before the refugee crisis.

The group also found that similar faux-tickets were circulating as far back as the 1980s, as mentioned in a book published in 1989.