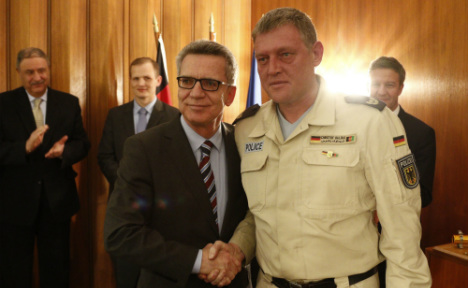 “We’re staying here as long as it’s necessary. But we also expect that that the Afghan population stays here,” Thomas de Maizière said on a visit to Afghan capital Kabul, according to N-tv.

Many Germans ask themselves how it can be that Afghans come to seek asylum in their country when Germany is providing security assistance in Afghanistan, the interior minister claimed.

“We want the influx of refugees to be stopped,” he added.

The interior minister also sought to quash rumours he said were leading to Afghans coming to Germany with false hopes.

“There is no welcome money in Germany. There is no guarantee of a job or an apartment,” de Maizière told state broadcaster ZDF, warning Afghans not to listen to propaganda spread by people smugglers.

De Maizière insisted that there are still parts of the country which are stable, while conceding that it can’t be considered a safe country.

“There are still many (safe) provinces in the north. But also inside areas that aren’t so stable, there are safe areas,” he said.

But during the Interior Minister's visit a suicide bomber blew himself in heavy traffic in the capital, killing upwards of 20 people.

On Twitter people remarked wryly on the Christian Democratic Union (CDU) desire to send refugees back in such an atmosphere.

“De Maizière is demanding from others that they live in a land that he’ll only visit with the protection of a division of soldiers,” one commentator wrote.

“Despite the attack in Kabul, De Maizière is calling for Afghans to go back,” wrote another.

Other people expressed little faith that the minister could stop the stem the tide of migration.

“De Maizière is trying to convince Afghans to stop coming to Germany. Good luck with that!” one person commented.

Promising to step up deportations of Afghans from Germany, de Maizière mentioned using current flight routes between the countries and hiring charter planes.

“All these are possibilities and we will begin with them,” he said.

Germany has been training Afghan police since 2002, but currently only has 50 policemen in the country, about a quarter of the number it had a the high point of the NATO mission in Afghanistan.

German police officers have trained over 73,000 Afghan police personnel over the 14 years since the Nato mission began.

The NATO mission in Afghanistan officially ended in 2014, with security handed over to the Afghans.

Since then the situation in the country has deteriorated, with the Taliban gaining the upper hand in many parts of the vast country.

In the autumn the German parliament decided to stop withdrawing its troops from Afghanistan and authorized a slight increase in numbers from 850 to 980. These troops perform a training and advisory role.

Over the last 12 months Afghans have made up the second largest group of asylum seekers arriving in Germany after Syrians.

The Federal Office for Migration and Refugees (BAMF) registered 150,000 Afghan refugees in 2015, a staggering rise on the 9,700 Afghans who applied for asylum in 2014.