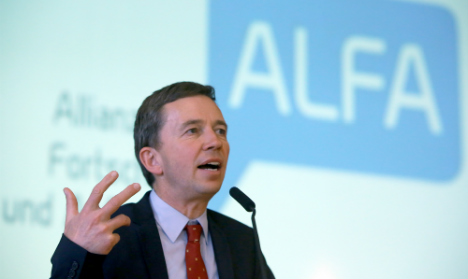 Speaking to the Augsburger Allgemeine Zeitung, Bernd Lucke – who founded the AfD as an anti-Euro currency party in 2013 – said that the “how the AfD are acting in the refugee debate is inhuman, cruel and unbearable.”

Lucke went further in his character assassination of the upstart party's new leaders, calling its politics “ugly and unwanted by people in Germany.”

The party leadership “hasn’t put a brake on this radicalization, but has encouraged it,” Lucke said.

The economist, who left the party in July after being toppled as leader, was reacting to recent comments by the new leader Frauke Petry who intimated that it was acceptable in certain circumstances for the police to shoot migrants at Germany’s border.

Petry’s deputy Beatrix von Storch went even further than her boss, saying that police could shoot at women with children.

She later backed down from this statement, saying that while it was acceptable to shoot at women, children could not be held accountable for their actions.

Days before being booted out of his position last summer, Lucke told reporters he feared he had created a monster, after the party he created as a protest at the economic constraints placed on Europe by the single currency turned into a right-wing populist movement.

Since the summer, though, the AfD has gone from polling at around 3 percent nationally to being Germany’s third most popular party with poll figures around 13 percent.

After leaving the AfD, Lucke set up the Alliance for Progress and Departure (Alfa). However the party has failed to make an impact in opinion polls.