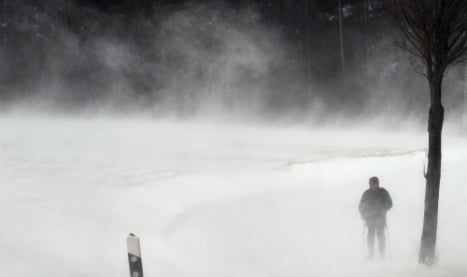 A walker struggling through windblown snow on January 15th in the Allgäu alpine region of Bavaria. Photo: DPA

The mountainous Allgäu region has endured storms and long periods of rain in recent days that have increased the risk of avalanches to the second-highest of five warning levels, the Bavarian Avalanche Warning Service said.

A low-pressure zone has brought storms and rain to the south and south-west, while warmer temperatures have thawed some snow.

Floods forced the closure of some roads, including the B305 main road, in Bavaria overnight from Sunday to Monday after large amounts of rainfall.

The additional water increased the level of the Rhine at the Maxau measuring station in Karlsruhe from less than five to over seven metres in under 48 hours. And in the southern Black Forest, the Höllentalbahn – Germany's steepest railway line, running from Freiburg to Donaueschingen – was shut down for fear of rock falls onto the trains, leaving thousands of commuters stuck at home.

Meanwhile, the Baltic coast saw large numbers of traffic accidents due to ice around Rostock, Stralsund and the island of Rügen, although police said only seven people were slightly injured.