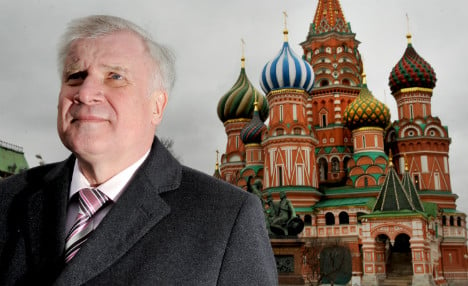 Seehofer defended his plans to travel to Moscow on Thursday on ZDF television on Sunday evening, saying that “we're not running a parallel foreign policy in Germany”.

But he has been fighting against harsh criticism from federal politicians in Berlin.

“Foreign policy is made in Berlin, not in Munich,” MP and Social Democratic Party (SPD) foreign affairs spokesman Niels Annen told the Welt am Sonntag.

“Seehofer has positioned himself clearly against the Chancellor in the refugee debate – I hope that he will leave off this trip,” Christian Democratic Union (CDU) foreign policy specialist and MP Roderich Kiesewetter told Welt am Sonntag.

Kiesewetter warned that Russia was co-operating with far-right parties in Germany in a bid to undermine opposition to Putin's foreign policy.

One recent example has been Russian TV's stoking of anger with TV news reports on the alleged rape of a young girl by refugees in Berlin.

Police said at the weekend that the girl had spent the night of the supposed rape at her boyfriend's house.

Russia experts told The Local earlier last week that Putin's propaganda machine was trying to blacken Europe's image with the Russian public and stoke unrest among Russian-speakers inside Germany and the EU.

Seehofer has form for using connections to foreign leaders as a means to put pressure on the government in Berlin.

Orban used the occasion to blast Merkel for “moral imperialism” after Germany criticized Hungary's construction of a border fence to shut out refugees.

SEE ALSO: Busload of refugees to be sent straight back to Bavaria