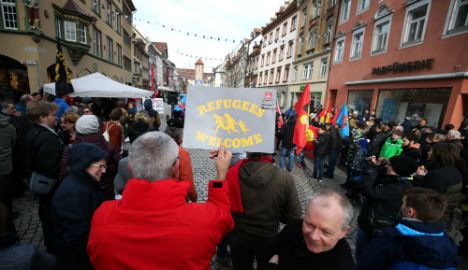 Some 80 far-right demonstrators and 150 counter-protesters — “anti-fascist initiative and citizen movement members as well as refugees themselves” — showed up in the Black Forest town of Villingen-Schwenningen, police said.
The grenade thrown over a fence Friday morning was filled with explosives but it was not immediately clear whether it was equipped with a detonator, a police spokesman in Villingen-Schwenningen, which has some 80,000 residents, said in a statement.
It did not explode and no damage or injuries were reported.
In an interview with German daily Die Welt published Saturday, the general secretary of Angela Merkel's Christian Democrats (CDU) party Peter Tauber said the act was “despicable and frightening”, and classified it as “attempted
murder”.
“Whomever did this is not a concerned citizen. This is a criminal,” he said.
In a country that has welcomed more than one million migrants in the last year, violence against asylum seekers has been on the rise.
The Federal Crime Office on Thursday reported 173 attacks against refugee shelters in 2015, more than six times the number recorded during the previous year. Another 10 cases were reported in January.
Sigmar Gabriel, German vice chancellor and economy minister, was quoted in the press on Saturday as saying that there is “an alarming increase in acts of violence” against refugees, adding “we are a stable democracy”.
“I am against the image that Germany is a country of violent far-right extremists and foreign criminals,” he said.